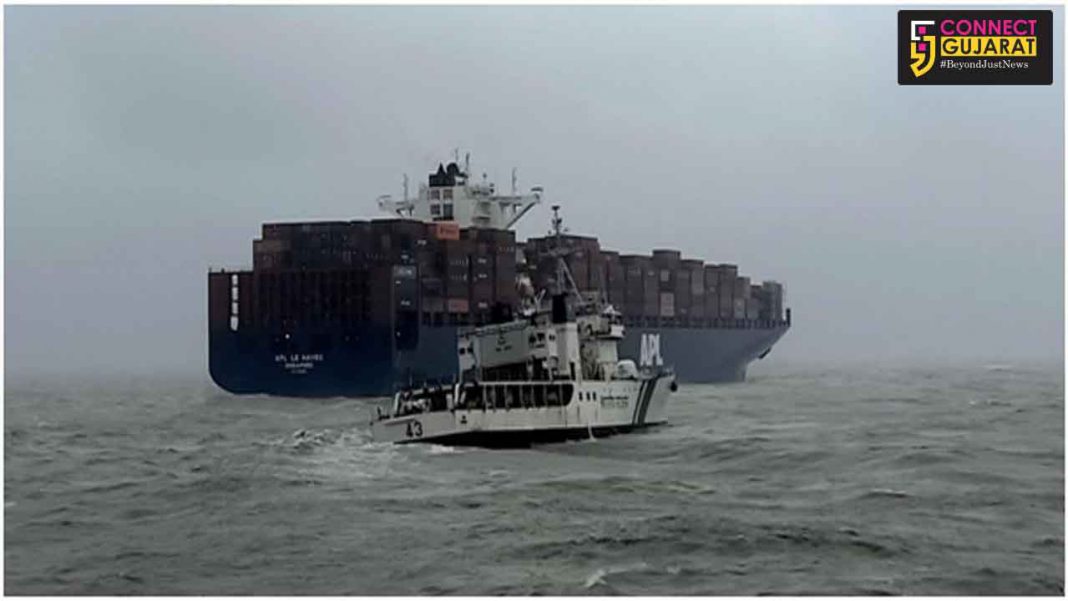 Amidst heavy weather conditions, Coast Guard Maritime Rescue Sub-Centre received information about fire incident onboard MV APL Le Havre about 40 nautical miles South-West of Porbandar harbor on 09 Aug 2019, at about 1915 hrs. The container vessel with a crew of 26 person left Karachi harbour and was destined to Neva Sheva.

After the information Radar Operating Station Porbandar swung into action and positive communication was established with the distressed vessel. Vessel reported fire in four containers stowed in aft section of accommodation.  Vessel was advised on initial fire-fighting. ICGS Sangram was diverted to intercept the vessel.

Coast Guard ship established communication and guided the vessel to head toward it. ICG ship undertook External Fire Fighting operation to extinguish fire. However, due to heavy sea conditions sustained fire-fighting was aborted. The distressed vessel was advised to drill holes in container and carry out flooding of container reported with fire.

The fire was brought under control after hours of fire-fighting efforts by ship’s crew. APL Le Havre, was then escorted to Mundra port outer anchorage. At around 1030 hrs, vessel came to anchor off Mundra, where Port and All Security Agencies embarked onboard for security clearance and investigation. After check the Ship’s stability is found to be intact and all crew are safe. Fire was put under control and ship is planned to enter Mundra Harbour for further investigation and necessary actions.