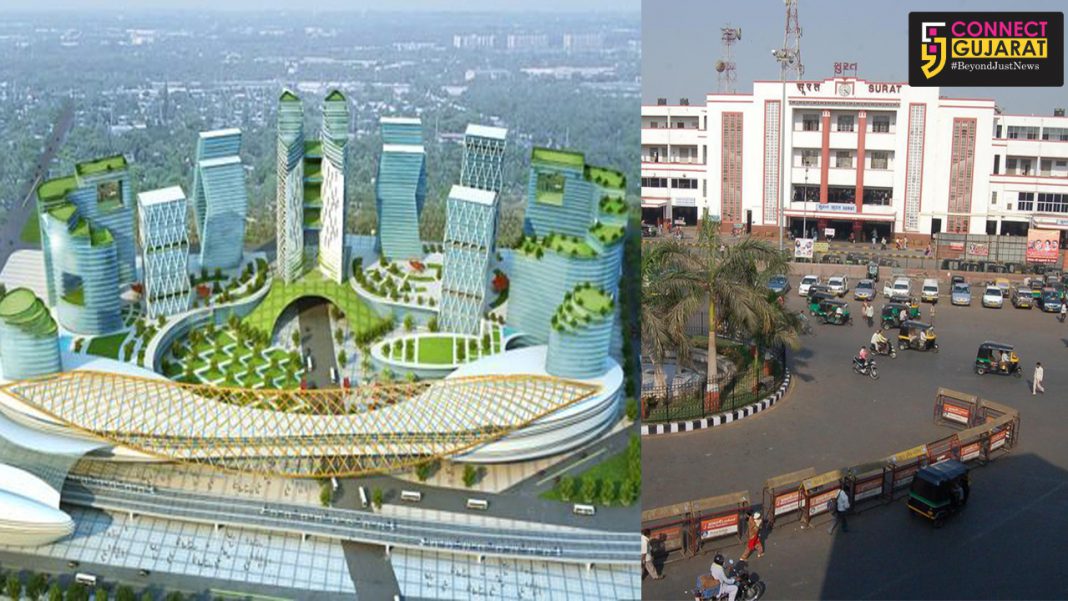 BETTER PASSENGER AMENITIES. The aim is to make travelling experience of passengers more pleasant and comfortable.

According to a press release issued by WR CPRO Ravinder Bhakar, W. Rly is taking all efforts to make the travelling experience of the passengers more pleasant, convenient and comfortable. One such step in this direction is the re-development of Surat station and to develop a Multi – Modal Transportation Hub (MMTH) which will also incorporate bus terminals, Metro, autorickshaws & private vehicles in an integrated hub to provide seamless connectivity. This state of the art  MMTH will be built over 3,40,131 sq. m of land pooled from Railways, Gujarat state Road Transport Corporation (GSRTC) & Surat Municipal Corporation (SMC).

This is a first of its kind project in India bringing together Centre, State and local Municipal Corporation. The station redevelopment will be done via commercial development on leasehold rights for a lease period of 90 years on the vacant railway land and air space. This hub is expected to cater to approximately 4 lakh passengers per day by 2033 and approximately 5.25 lakh passengers per day by 2053. Currently, the built-up area of the station is approx. 36,950 sqm and after the redevelopment it will be approx. 1,01,750 sqm.

Bhakar also stated that a special purpose company named Surat Integrated Transportation Company (SITCO) has been formed by Indian Railway Stations Development Corporation (IRSDC), Gujarat state Road Transport Corporation (GSRTC) and Surat Municipal Corporation (SMC). The station redevelopment project of Surat station is one of the most important projects because of its geographical and economical importance.

Under the redevelopment project, the railway station building will be constructed on at least 55,374 sqm. The space frame roofing across all the existing railway tracks for 100 meter on each side of the concourse shall be of 16,400 sqm and platform shelter roofing on at atleast 10,800 sqm.. The platforms will be furnished with granite flooring on approx. 4,000 sqm of surface area.

Post the redevelopment, the parking requirement of the station will be approx. 750 equivalent car space (ECS) (439  ECS at Multilevel car parking and 311 on surface parking area). This parking system will be provided near the east-west side of the station building. The existing subway and ground floor of the existing station building will be used for parcel services. The Skywalk connectivity between the railway station, bus terminals and the commercial area will be of 4,290 sqm.  A total no. of 90 escalators and 30 elevators will be built in the Surat MMTH.

Along with these, the incoming and outgoing of passengers will be segregated which will be of great help to manage the crowd at the MMTH. Waiting rooms, seating arrangements for passengers will be shifted to the second floor and facilities such as toilets, ticket counters, enquiry counter, cloak room, parcel facility, medical room, prepaid taxi, security room, etc. will also get a top-order upgrade.

The façade of the station building will be improved as well as the circulating area which will ensure proper entry and exit of commuters. A lighting tower will be installed for proper illumination of the station area as well as modern and cost effective lighting arrangements will be made for all the platforms. The water booths and Pay & Use toilets will be renovated too. Waiting and Retiring rooms will be furnished with modern furniture for the comfort of passengers.

A passenger guidance system including signages and coach indication will be placed to guide commuters for their ease. Booking and Enquiry Offices will also get a facelift with better lighting arrangement, spacious queuing area in front of the booking windows.

The Surat MMTH will be beautified with modern fixtures and art too for which architects and consultant have been hired. The whole redevelopment project of Surat station will create new landmarks for Western Railway towards the journey of progress and modernization of railways in the future.

Surat city in Gujarat is well known in India for its Diamond industry as well as its famous textile markets. Surat railway station serves as the railhead to this bustling city and is considered as one of the busiest railway stations not only over Western Railway but also across Indian Railways. It is a major station on the Mumbai – Delhi rail corridor and caters to trains plying from North to South as well West to East and vice versa.

More than 150 passenger ferrying trains pass through this station which includes 21 trains originating and terminating here on an average 45 trains ply daily from Surat station. which exclude the goods traffic that traverse through this important station. Currently, Surat station is well equipped with FOBs, subway, waiting halls and rooms for men and women, retiring rooms, bathing cubicals, seats all over the station premises, water coolers, food plaza, emergency medical room to ease the journey of the passengers.

Surat station has also benefitted since the commissioning of the newly dualized & electrified Udhna-Jalgaon section of Mumbai Division, immensely in passenger and goods traffic in just a year of the completion of this Doubling Project.  The 307 km long Doubling project, linking Udhna in Surat district of Gujarat to Jalgaon district in North Maharashtra, has provided a fillip to growth in areas falling under this rail section which has 44 stations, 380 bridges, 31 foot over bridges, 101 platforms. Passenger amenities like platform shelters, toilets, waiting rooms were also provided.