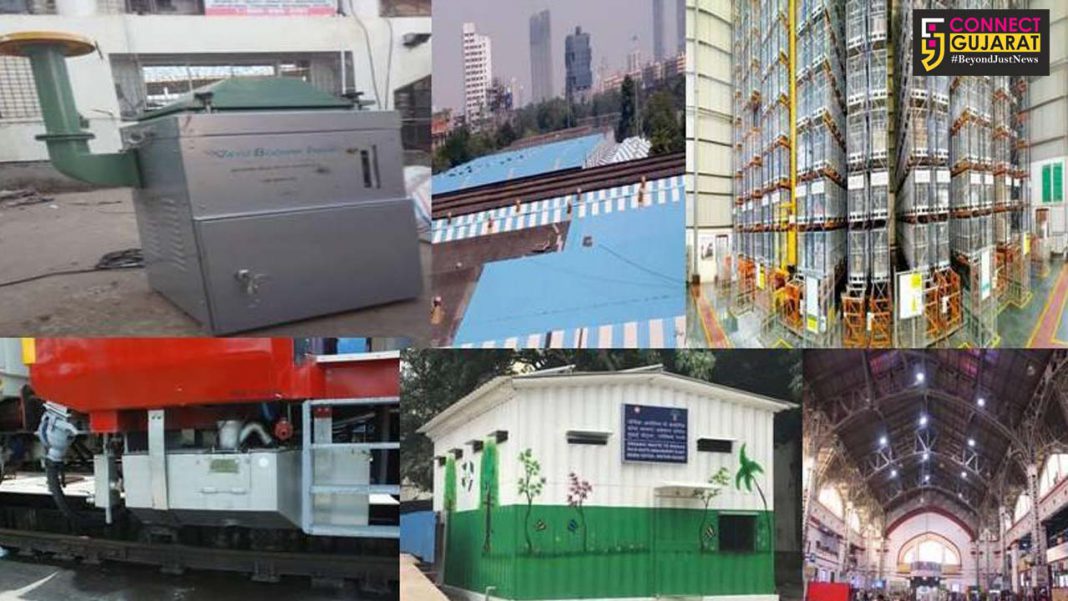 ‘World Environment Day’ to be observed on 5th June

Western Railway will observe ‘World Environment Day’ on 5th June 2019, with the theme ‘Air Pollution’. WR has contributed in preserving the environment and has reiterated their commitment towards the cause on this occasion of global importance.

According to a press release issued by Western Railway, the specific efforts and initiatives are undertaken for mitigating environmental impacts and reduce Green House Gas emissions has resulted in desired outcomes. At Lower Parel workshop, the environmental parameters like air quality, waste water quality and noise level are monitored on a regular basis. For reducing dust emission in the air ‘Automated Storage and Retrieval System’ (ASRS) for centralized materials storage has been commissioned. This has reduced in internal material transportation to considerable extent and thus reduction in dust emission and emission of air pollutants also.

Another method of controlling Air Pollution is saving fuel and only 2 coal fired open hearth furnaces are being operated as against 4 in the earlier years. In 2016-17, 46.78 Kgs coal was consumed per day, which has been reduced to 18.22 Kgs per day in 2018-19, thereby improving air quality. The consumption of diesel oil too has been brought down by putting in service electrically operated leister trucks for in-house transportation of materials thus reducing emission of air pollutants. In year 2018-19, 80.36 litre per day diesel is being used as against 101.36 litre per day being used in 2016-17. The hazardous waste too is disposed off in a systematic manner to authorized recyclers to avoid air pollution.

Lower Parel workshop has space constraints and hence there is no open land available for plantation. Inspite of this 150 Ashoka trees were planted in 2018-19 and W. Rly has been undertaking massive afforestation drives. More than 12.50 lakh trees have been planted over W.Rly alongside the tracks (420.36 KM) as well as for block plantation in 752.34 Hectare. A vertical garden has been erected at Churchagte station building for beautification as well as for adding more green cover amidst the concrete jungle. At Ahmedabad itself more than 3.5 lakh trees were planted covering an area of 126.33 hectares.

Lower Parel workshop has got the distinction of getting the ISO 50001:2015 Energy Management certification. Yet another feather on the cap has been that all the 35 units i.e 5 Workshops, 3 Diesel sheds, 1 Engineering  Workshop & 17 Coaching depots, 6 Wagon Depots, 2 Electric Loco sheds and Mumbai Central laundry has been accredited with ISO 14001 certification for Environment Management System. Bio-Gas plant has been commissioned for Solid Waste Disposal and Management System at Mumbai Central. The Plant mainly converts the organic waste into Bio gas which is utilized in the staff canteen. The capacity of the Plant for disposing the organic waste per day is 500kg.

Western Railway has introduced some pioneering initiatives such as installation of roof top solar panels on Railway buildings, Railway coaches to harness solar energy and setting up solar power plants on Railway land to reduce carbon footprints. Various eco-friendly and energy efficient initiatives are being undertaken on massive scale. Non-conventional energy is being promoted for a better and cleaner environment and also as an initiative towards conservation of energy with solar panels, windmills, water recycling plant etc. being installed in railway premises wherever possible.

WR has undertaken fitment of bio toilets on coaches to ensure zero discharge of human waste from coaching train operating in WR.

Five rail corridors in WR, Porbander – Wansjaliya section, Dhola Jn – Mahuva (excluding Dhola) section and Rajula Road – Rajula City section in Bhavnagar Division and Okha – Kanalus in Rajkot Division have been declared as Green Corridors. All the trains plying on these sections are provided with bio-toilets which will ensure 100% zero discharge of human waste on tracks.

At present, 4137 coaches out of 4864 coaches of W. Rly are provided with 15197 Bio-toilets. Mumbai division has undertaken ventilation work of 169 coaches with bio – toilet to prevent foul smell from emanating from them. W. Rly has adopted the RO – RO service which is an eco-friendly initiative for seamless transportation of commodities from road to rail as well as a joint effort to check pollution and to reduce fuel consumption and road congestion.

Majority of rakes working in Mumbai suburban have regenerative braking in which energy is fed back to grid during braking. On an average 35% energy consumed during traction is regenerated. This has led to reduction in energy bill as well as minimization of carbon emissions. Currently, W. Rly’s 12 trains comprising of 17 rakes are running on Head on Generation (HOG) power supply. W. Rly has achieved an approximate net savings of Rs. 52.87 Cr since inception of this system till April 2019.

It is also pertinent to mention that saving of 9079 KL in HSD oil (Fossil fuel) consumption is achieved, besides reduction in air & noise pollution. This system has also contributed in reduction of CO2 emission by 24333 MT. The release states that Western Railway has taken up such initiatives of controlling Air Pollution and contributing towards the social cause of environment conservation on all its six divisions.