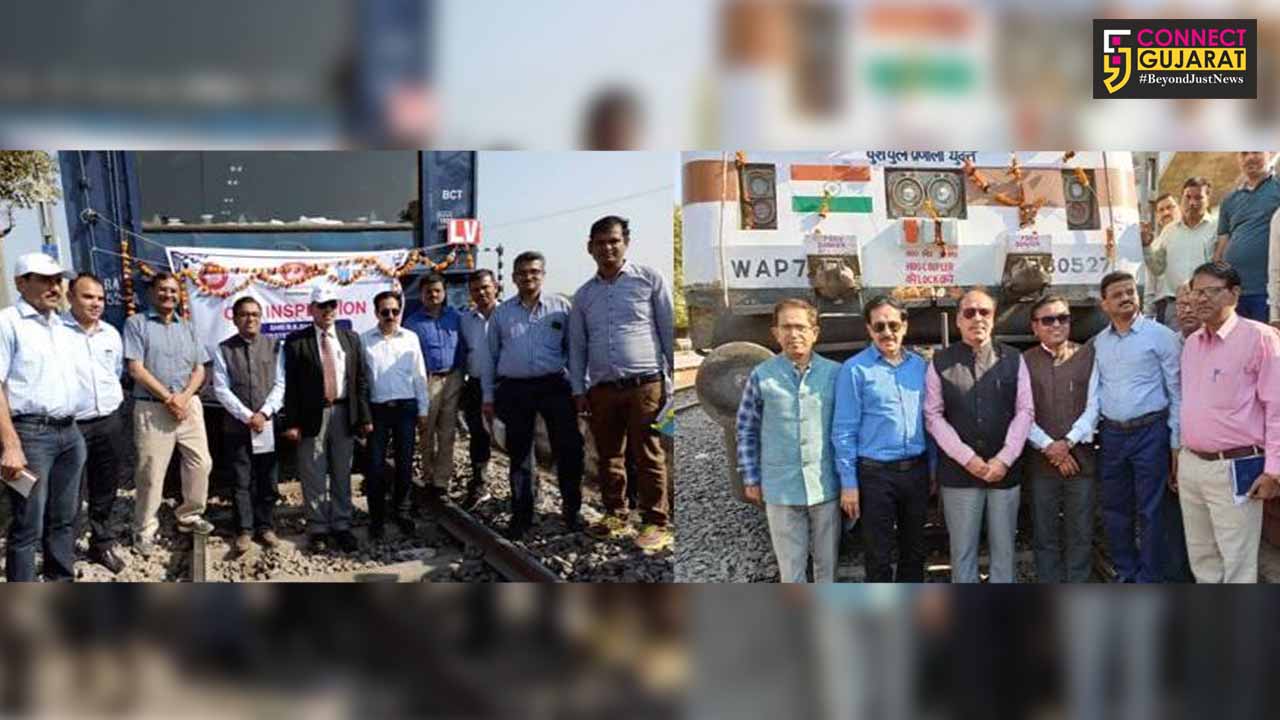 railway safety inspected the section with other officials

According to a Press Release issued by WR CPRO Ravinder Bhakar, with the completion of Surendranagar – Dhola-Dhrangadhara section (155 RKM) electrification project, WR has successfully completed the electrification of total 535 RKM during current financial year upto 20th February 2020. This includes electrification of various sections namely Indore-Ratlam & Ratlam -Nimach in the state of Madhya Pradesh, Ahmedabad-Palanpur, Ahmedabad -Viramgam, Viramgam-Mehsana, Surendranagar–Botad-Dhola & Surendranagar-Dhrangadhra in the state of Gujarat which is more than four times as compared to the target achieved last year.

Bhakar stated that further about 300 RKM more is planned for CRS inspection in March 2020, which will take the grand total to 850 RKM by WR which is about 25% of total electrification on entire IR during the current financial year. Also, efforts are being made to electrify the route upto Pipavav port by March 2020 so as to enable to carry double stack containers from Pipavav port to Delhi via Palanpur by April 2020.

Western Railway is the first Railway to successfully run double stack containers in electrified territory for which high raise OHE having contact wire height of 7.57 mtr. has been provided, which is a first of its kind in world. With introduction of electric traction, which is pollution free and energy efficient mode of transport Western Railway is expected to save about Rs.200 crores per annum on fuel expenses.

To carry 1000 GTKM on electric traction, hardly 4.5 unit of electric energy is consumed, which costs about Rs.25 as against 2 ltrs. of HSD oil costing about Rs.150 to carry same load by diesel traction. Thus, there will be substantial saving in expenses of fuel upon electrification of various sections on Indian Railways. In addition electrification will help in improving mobility of trains being more reliable and powerful thus increasing the line capacity to run more trains in the section.

Goods & Mail/Express trains are being taken over on electric traction progressively on the electrified sections. Electrification being most energy efficient mode of transport shall contribute significantly in maintaining clean & green environment by reduction in Green House Gas emission and reduction in carbon footprint of the country. Western Railway has thus taken giant stride in its commitment to promote energy conservation & help in reducing global warming.

It is indeed noteworthy to mention that due to these sustained efforts, Western Railway has been awarded 1st prize in Transport category during National Energy Conservation Award-2019 by the Bureau of Energy Efficiency, Ministry of Power on 14th December, 2019.