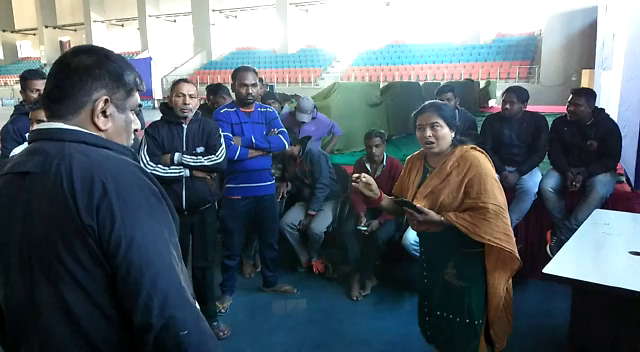 Nothing unlawful officially communicate with the VMC – said organizers

The 11Sports (ESPL) and Table Tennis Association of Baroda is going to organise the 11Sports 64th National School Games Table Tennis Championships 2018 in Sama Indoor Sports Complex from 2nd to 6th January 2019. However the venue is in news for wrong reasons before the event as the local councillor put allegations on the organisers for taking the services of VMC sanitary workers for cleanliness. The venue is managed of VMC and Gujarat Sports Authority under joint venture.

On Monday the local councillor from Ward 1 Pushpa Vaghela reached the venue at the Sama Indoor Sports Complex and put allegations on the organisers for taking the services of VMC sanitary workers for cleanliness inside. The venue will witness national level TT tournament in couple of days and the issue before the event put the organisers also in dilemma as they said to be officially communicated with the VMC officials about the help from their side.

“I came to know about Swati and Sama sanitary workers are assigned for cleanliness in the sports complex before the national event. When VMC standing committee chairman is moving around in the city and fines people for violation then in this case we demand and waiting for the action against the contractor,” said Vaghela.

However the organisers said there is no such issue of using sanitary workers unlawfully at the venue. They officially communicate with the officials asking for their help during the event. “This is a national level TT event where around 1500 players will turn up from all across the country. We officially communicate with the VMC for helping us in maintain cleanliness at the venue during the event and nothing is unlawful. After the issue we now will hire private workers for cleanliness at the venue as last year the players and officials appreciate the cleanliness during the games and we want to continue it during this time also,” said Kalpesh Thakkar Honorary Secretary TTAB.