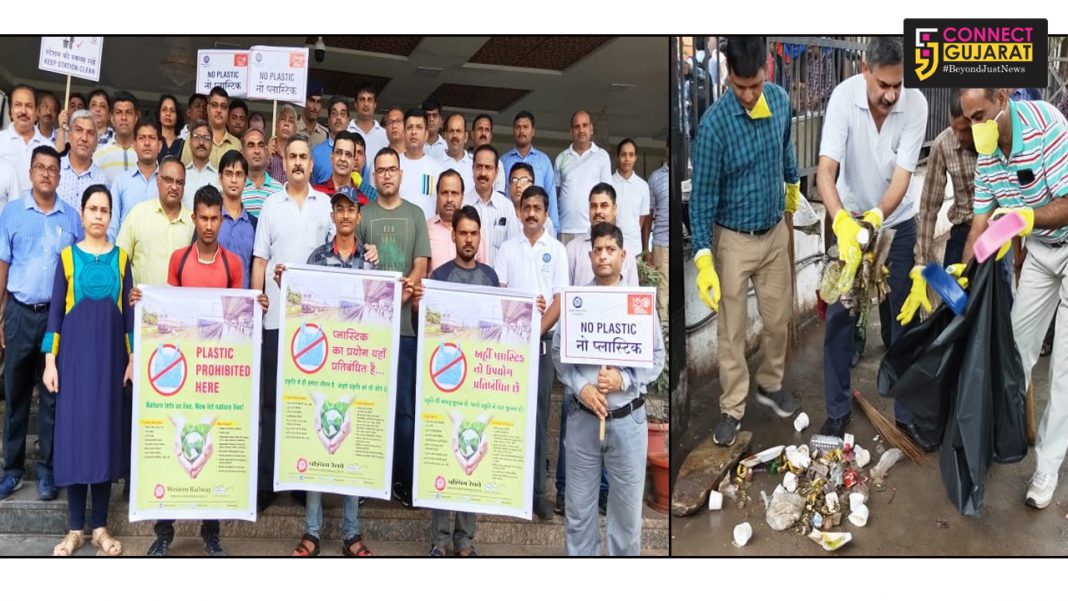 “Swachhta Hi Sewa”, the Nationwide Cleanliness campaign is being observed from 11th September to 2nd October 2019 over Western Railway where various events is organized to highlight the ban on use of single use plastic. Massive shramdaan with participation from all stakeholders on plastic waste collection was undertaken on 1st day of this campaign.

Shramdan was undertaken by team of Mumbai Division’s officers, staffs and supervisors at Mumbai Central station on the first day of “Swacchta Hi Sewa” under the leadership of Sunil Kumar – Divisional Railway Manager. Plastic waste was collected by 300 officers and staffs of Mumbai Division. Plastic bottles were crushed inside the bottle crushing machine at Mumbai Central station. Messages of ban on single use plastic have been displayed at various station over division.

Swachhta slogans were called out to create awareness among stockholders. Samvad was done by DRM of Mumbai Central division Sunil Kumar with staff, passengers and other stakeholders. Messages of Prime Minsiter was also being displayed at Mumbai Central station. Central announcements regarding Swacchta Hi Seva are being done at all places of suburban from Churchgate to Dahanu Road stations. “Shramdan” is being undertaken at all major stations with the involvement of staffs and local people for motive cause.

At Vadodara Division, Shramdan was performed by DRM Devendra Kumar alongwith officers and staff at Vadodara station. Nukkad Natak was played by cultural team to educate passengers about ill effect of plastic uses.

A Rally under the leadership of Parmeshwar Phunkwal – Divisional Railway Manager of Rajkot Division comprising railway officers and staff was organized  at Rajkot division in which it was appealed to passengers to keep railway premises clean and not to use plastic at stations. Intensive cleaning of main gate, circulating area, parking stand, passengers waiting room etc was also done at Rajkot station by DRM along with officers and staff.

Pamphlets were distributed to passengers to create awareness amongst them and it was also appealed to eliminate used plastic bottle in bottle crushing machines installed at various station. At Bhavnagar Terminus station, shramdan was done by Prateek Goswami – Divisional Railway Manager of Bhavnagar Division alongwith branch officers and staff. They collected plastic waste from station premises, platforms and on railway tracks. DRM instructed all officers and railway staff present to ban onetime use plastic at railway stations of the division.

Banners and posters were also displayed at various stations giving message regarding ban on plastics. Team of officers and supervisors were deployed to different stations and health units to appeal to co-operate in banning use of plastics and make this mission successful.

At Ratlam Division, cleanliness drive was organized at various stations over division and cloth bag were distributed to cleanliness staff for keeping premises as well as environment clean. On this  occasion a tree plantation drive was executed at Gambhiri Road station of Ratlam Division among the presence of MP C.P. Joshi and DRM R. N. Sunkar of Ratlam Division. At Ahmedabad Division too, various activities were organized under ‘Swachchta Hi Seva’ campaign.