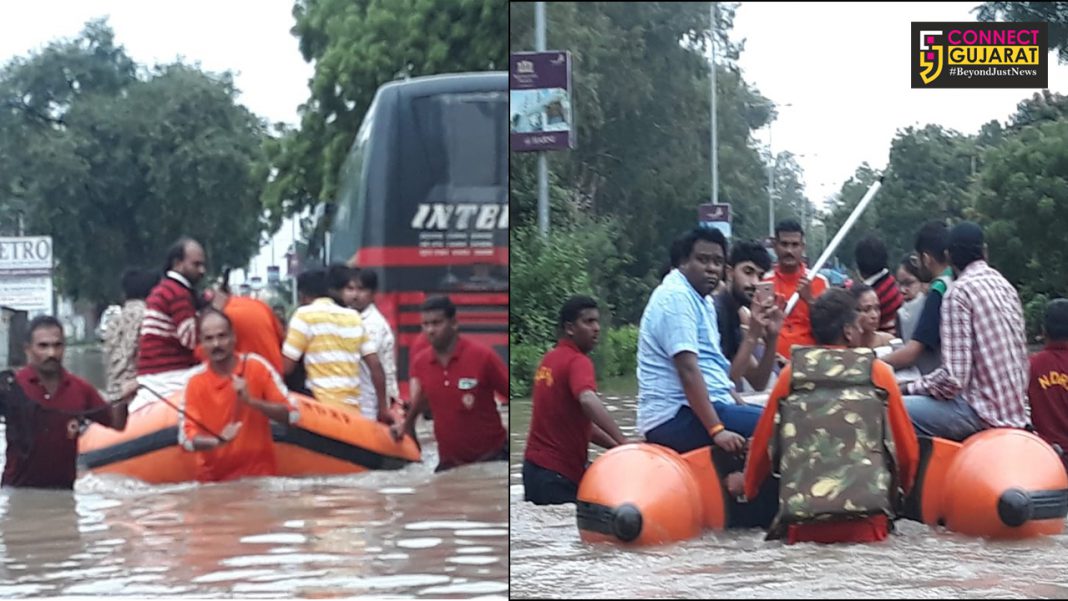 Vadodara city finally had a sigh of relief after the rain stops late in the evening. The heavy downpour for nearly seven hours waterlogged the whole city and put the life to a stand still. The Vishwamitri river flowing from inside the city crossed the danger mark and flows near 30 foot mark at night. As a precautionary measure the bridge was closed for vehicular movement and nearly 400 peoples were shifted to safer places lives near the banks of the river.

With such heavy downpour the Gujarat CM Vijay Rupani also take stock of the situation and guide the government machinery in action for help and rescue efforts. Holiday is declared at schools and colleges due to the heavy rainfall in the city. Fire brigade and police department work round the clock the help the persons in need. Four members of a family from slum area on Chhani Bajwa road are believed to be died after the wall fell on them.

Almost every area in the city is reeling under water and people find it difficult to move as the electricity supply was also cut off due to safety reasons. Many trees uprooted in the city and fire brigade reached the spot to clear and rescue the trapped. Incidents of people left their vehicles in the waist deep water and reached to safety was also witnessed during the day.

Trains are also affected in the division as many of them were cancelled and divert from other roots due to waterlogged tracks. The rescue efforts is on war footing and administration is taking every step to reach the people in need and move the affected ones to safety. With more rains prediction the teams are standby at scheduled areas and issue warning to the people to be alert.