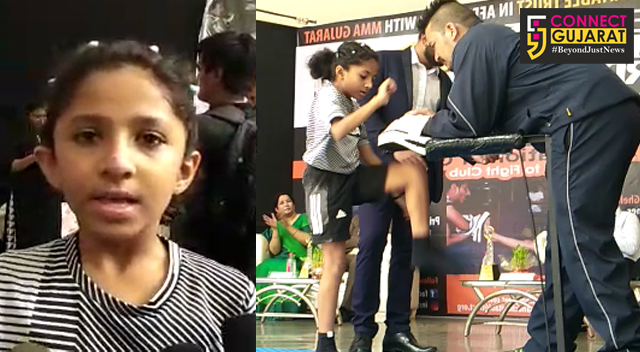 Prisha Pandya an eight year old girl in Vadodara attempted and successfully broke the world record for 'Maximum Knee Strike Without Additional Weights by using only one leg in three minutes' officially on Monday. She broke the earlier record of 177 kicks by an athlete in USA in the same number of minutes.

The 3rd standard student of D. R. Amin memorial school attempted and broke the record in three minutes with 401 knee strikes before the packed audience of students, teachers and guests. However the road to achievement is not so smooth for Prisha as she has to fight with herself to reach the milestone.

She had low immunity problem in the past and doctors suggested her parents to involve Prisha in physical exercise and sports to restore it. They approached Babloo Sawant from Mix Marshal Arts Association and under his coaching she began to improve.

Babloo started with Biology healing training aimed to improve immunity, apetite, hormonal imbalance and strength. Later she got the confidence to attempt the record and successfully broke it. Prisha thanked her coach, parents and teachers for the never ending support.

"It's a great achievement by Prisha as she broke the world record of maximum knee strikes with one leg. Earlier the record was with USA for 177 kicks and Prasha kicked 400 plus. We have 17 World Records with us and this one also add to the tally, " said Babloo Sawant coach and owner MMA.