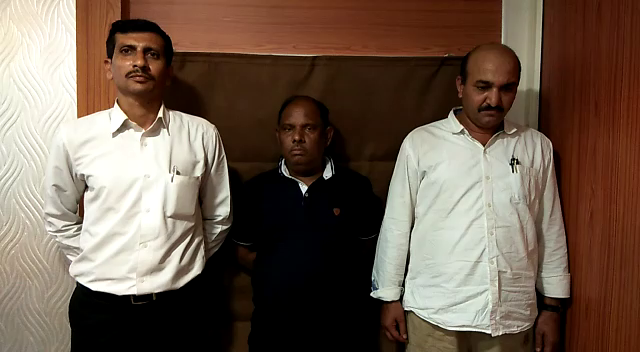 Lure people to invest money and promise to double the amount

Vadodara crime branch arrested three employees of Sahara for luring people to invest their money and promise them for double return. The accused are working in Vadodara and arrested by the police after a complaint was registered by one of the victims.

Hitesh Singh from Vadodara gives a complaint in the crime branch against the owners and employees of Sahara Q shop unique product range limited for cheating people in the name of double their money. He mentioned the names of owners Subroto Roy, Sapna Roy, A.P. Shrivastav, Devendra Kumar Shrivastav, Romi Dutta, Kumkum Roy Chaudhary, Ashok Roy Chaudhary along with Zonal, regional and branch managers for fraud in the name of investment.

The complaint named 19 persons as accused and states that in 2011 they collected money from the people to invest in the Q shop and they get double the amount in six years time. They collected 57.55 lakhs from the customers and promised to return 1,15,11,280 in the committed time. But they failed and cheat people of their hard earned money.

Based on the complaint the crime branch arrested three Sahara employees out of 19 from Baroda and booked them for various offences. The team arrested Sahara branch managers Surendra Solanki, Zuber Ishaq Patel along with the regional manager Balwant Rajput.

The convinced the customers to invest money in 2012 by promising them of high returns and also issued certificates to them. The complainant is also one of them and went to collect his money after the promised six years but the accused denied. He then gives a complaint in the police and based on that the crime branch arrested the trio from Vadodara.