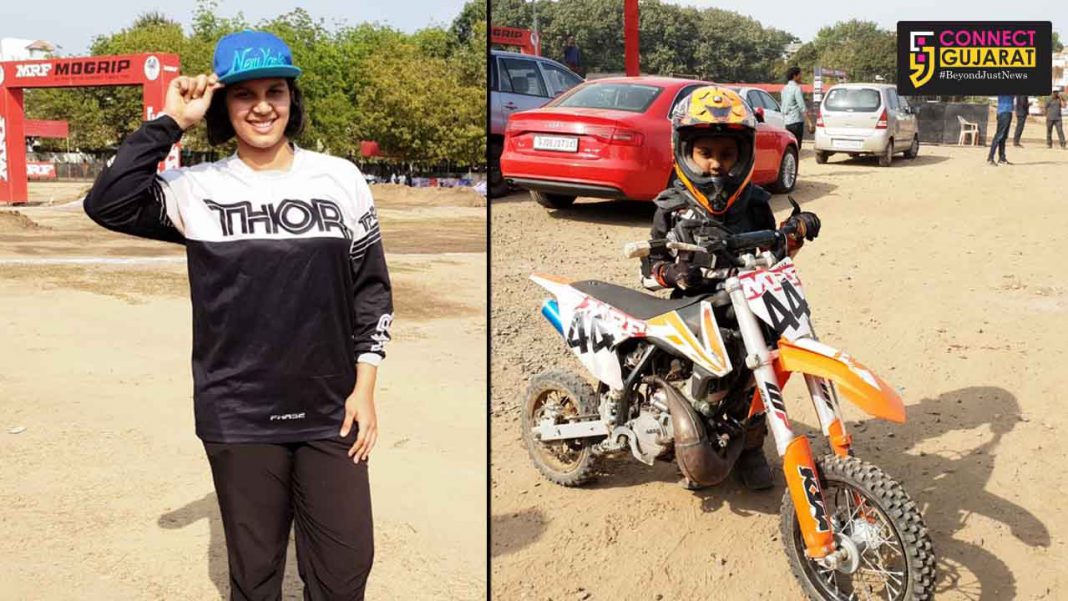 Seven year old boy Viraj Rathod and 16 year old Tanika Shanbhag is all set to compete with the male racers in Vadodara. Viraj is the youngest among all and Tanika is the only girl taking part in the final of 19th edition of  racers are the highlight of the MRF MoGrip FMSCl National Supercross Championship 2018.

The Grand Finale of the 19th edition of the MRF MoGrip FMSCl National Supercross Championship 2018 will be held in the city after a gap of eight years. Around 150 riders will take part in the championship with all eyes on the only woman rider from Satara and youngest seven year old from Indore.

The youngest of all Viraj is excited to compete in the supercross and said his hand will never comes down from the accelerator.
Studying in 2nd standard in Shri Satya Sai Vidya Vihar at Indore he is racing from since he was 5 years and follow his father’s footsteps. Till date he compete in MRF Indore in 2017, Goa, Jaipur, Dubai, Nasik and now in Vadodara as the youngest rider of all. His father Yashraj Rathod is preparing and train him to participate in MX junior Motocross World Championship in 2020.

On the other hand 16 year old Tanika Sanket Shanbhag is excited to take part as the sole female in the championship. She became 1st runner up in Asian championship at Malaysia and now eyeing the world’s toughest Dakar rally.

“Iam competing in SX 2 category and quite excited to ride along with male racers. I believe there is nothing like male females in the racing and the only thing matters is determination and skills to perform. I started racing from 2016 and my grandfather prepare the track inside our farmhouse for practicing. Racing in my passion and I am eyeing to compete in the world’s toughest Dakar rally,” said Tanika.

11th standard Student from DG college Satara she idolise C.A. Santosh and Laia Sanz from Spain. She wants to pursue career in racing and will switch over to rally from next year.

This will be the 6th and final round of the FMSCl National Supercross Championship 2018 as racers from all across the country try their skills to win the prestigious championship. This is the biggest off-road 2 wheeler National Racing Championship organised by GODSPEED Racing, Pune spearheaded by 7 times National motorsports Champion Shyam Kothari.

This event in Vadodara will be organised by Godspeed in association with BAR presided by Sunil Nigam a well known name in racing circuits. Veer Patel ex champion has been instrumental in bringing a round of this coveted championship to Vadodara at the iconic Akota Stadium after a gap of 8 years. For the first time the city will witness the freestyle motocross show put up two Australian riders gives the audience feel their hearts in their mouths.

The race completed the rounds in Cochin, Goa, Coimbatore, Jaipur, Nasik and comes to Vadodara for the final round. Supercross is a motorcycling sport that involves off road motorcycles racing on artificially created dirt track consisting of steep jumps and obstacles. The 19th edition of the MRF MoGrip-FMSCl National Supercross championship has attracted almost 150 participants across the 8 categories In each of their previous events.

Supercroes is gaining popularity ln lndla, wlth close to ten thousand spectators in hordes at each of the venues last year, leading to an Increase In partlclpatlon and growing Involvement and support from Corporate houses and medla alike.

The technically demanding track is 750 meters in length, which includes 12 double jumps, a cut tabletop, 1 tabletop, whoops and berms. The organizers have created a very demanding track, which will test the skills of the riders.

For the 1st time in history, the city of Vadodara stands to witness a thrilling ‘Freestyle Motocross ‘show which will be put up by 2 of Australia’s top FMX athletes Shaun Webb who will ride a Honda CR 450 and Jordan Sprague who will be astride a Yamaha YZ 250 and we will be able to witness some of the most unbelievable tricks and stunts ever performed on motorcycles.