Connect Gujarat
#Beyond Just News
More
Home Gujarat Two died in a collision between two trucks near Ambav village in... 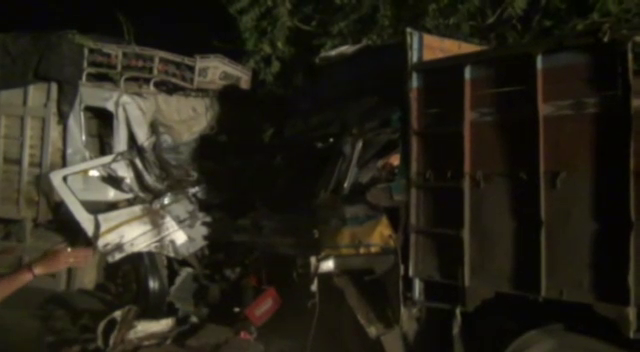 Two persons died after two trucks collided with each other near Ambav village in Dabhoi. Fire brigade rescued the trapped three after lots of effort where one died on the spot and another at the hospital during treatment.

As per the details the two trucks collided near Ambav village in Dabhoi on Friday night. The impact was such that both the trucks turned into wreckage and locals rushed to the spot and tried to rescue the three stuck inside.

Meanwhile SP Tarun Duggal and Dabhoi MLA Shailesh Mehta (Sotta) also reached the spot to take stock of the situation. Later fire brigade was called and they rescued the three stuck inside the wreckage.

After three hours effort the fire brigade took out one dead and other two in serious condition from the wreckage. The injured were rushed to the SSG hospital in 108 ambulance where one died during treatment.

Traffic was also disrupted at the stretch after the accident. Dabhoi police registered the case and further investigate.