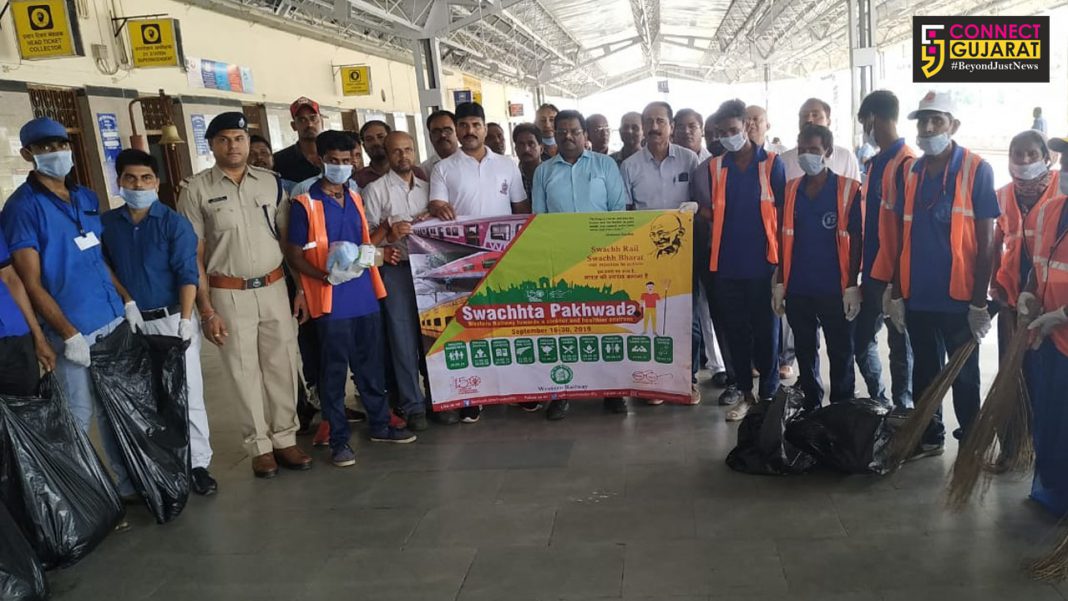 To commemorate the 150th Birth Anniversary of Mahatma Gandhi, Western Railway has planned a massive cleanliness drive at all stations. A Special cleanliness drive “Swachchta Hi Sewa” Pakhwada is being observed from 16th September to 30th September 2019 over Indian Railways with a view to ensure visible and tangible improvement in cleanliness at all its premises.

The 6th day of “Swachhta Hi Sewa” Pakhwada was observed as “Swachch Railgadi” day over Western Railway in which intensive inspection of identified special trains were done by teams of officers, supervisors and staff in all OBHS trains. Feedback of passengers were taken and award was given to OBHS staff for maintaining cleanliness in trains. Do and Don’ts posters regarding cleanliness and anti littering were ensured in coaches wherever not available.

According to a press release issued by WR CPRO Ravinder Bhakar, on 6th day of swachhta pakhwada  at Mumbai Division, Collective cleaning programs ware held in association with nagarpalika at Vapi Station and its circulating areas. An awareness rally was also organised by students of St. Fransis High School at Vapi station in which they appealed to passengers to not to use single use plastic at railway premises or anywhere. Anti flies and anti malaria spray activities were also done at station and colony. Stickers of new swachhta logo designed for 150th birth anniversary celebration of Gandhi ji and national flag are being pated on 70 MEMU coaches.

At Vadodara Division, shramdaan was done at Electrical Shop,  Smithy Shop and MFG Shop of Pratapnagar Workshop in which officers and staff participated in cleanliness drive. At Godhra Station, students of Ekta Education and Charitable Trust and Navrachna Prathmic and Madhyamic School  organised  an awareness rally and chanted slogans related to Swachchta. They also welcomed passengers by presenting the  roses with written message on cleanliness and also request vendors at station to maintain cleanliness at their stall.

At Bhavnagar Division, Cleanliness inspection were done in Train no 12972 Bhavnagar – BANDRA Terminus Express, Train no. 19269 Porbandar – Motihari Express & Train no Porbandar – Somnath Express and Train no 11463 Somnath – Jabalpur Express.  Shramdan was done at Ukai Songarh station. Cloth  bags were distributed at Porbandar station at the time of arrival of train No-59206 Porbandar – Kanalus Passenger.

At Rajkot Division, Senior Divisional Mechanical Manager of Rajkot Division along with supervisors inspected cleanliness parameters in  train no 19575 Okha – Nathwara Express. Pamphlets regarding Do’s/Don’ts of cleanliness were also distributed to passengers of train and they were appealed to use dustbin to maintain cleanliness at trains as well as station premises.