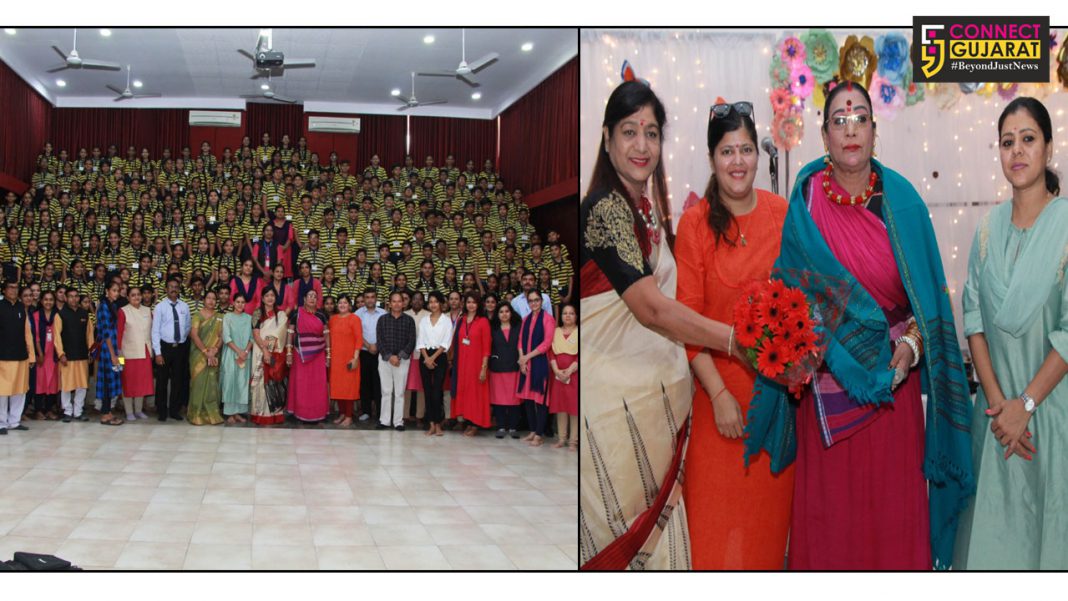 It’s a opportunity of lifetime for the students of Gujarat Public school in Vadodara as they interact with celebrated folk artist Teejan Bai. An exponent of Pandavani, a traditional performing art from Chhattisgarh, she enacts tales from the Mahabharata with musical accompaniments.

Her performance style is Pandavani which literally means stories of Pandavas, the legendary brothers in Mahabharat and involves enacting and singing with instrumental accompaniment an ektara or a tambura in one hand and sometimes a kartal in another. As the performance progresses, the tambura becomes her only prop, sometimes to personify a gada, mace of Bhima, or Arjuna’s bow or chariot, while at other times it becomes the hair of queen Draupadi, allowing her to play various character with effective ease and candour.

On Tuesday the students from 7th and up had the chance to listen to Teejan Bai performed Pandavani before them. Afterwards they also interact with the celebrated artist to know the ancient folk music of India. She also motivate the students about the rich Indian culture and called them to follow.

Born in Ganiyari village, 14 kilometres north of Bhilai Teejan Bai belongs to the Pardhi Scheduled Tribe of Chhattisgarh state. She heard her maternal grandfather Brijlal Pradhi recite the Mahabharata and develop liking to it. She soon memorised much of it and later trained informally under Umed Singh Deshmukh.

At age 13, she gave her first public performance singing in the Kapalik shaili (style) of ‘Pandavani’, a first time for a woman. Traditionally women used to sit and sing in the Vedamati style. She became famous and received invitations
to perform at special occasions and festivals.

Her big-break came when theatre personality Habib Tanvir noticed her talent and she was called to perform for then Prime Minister Indira Gandhi. She later received national and international recognition for her talent and honoured with a Padma Shri in 1988, Sangeet Natak Akademi Award in 1995, and Padma Bhushan in 2003.

She travelled all over the world as a cultural ambassador to countries like England, France, Switzerland, Germany, Turkey, Tunisia, Malta, Cyprus, Romania and Mauritius. She continues to enthrall audiences with her unique folk singing and her powerful voice, and now pass on her singing to younger generation.

Her acclaimed performances are Draupadi cheerharan, Dushasana Vadh and Mahabharat Yudh, between Bhishma and Arjun.