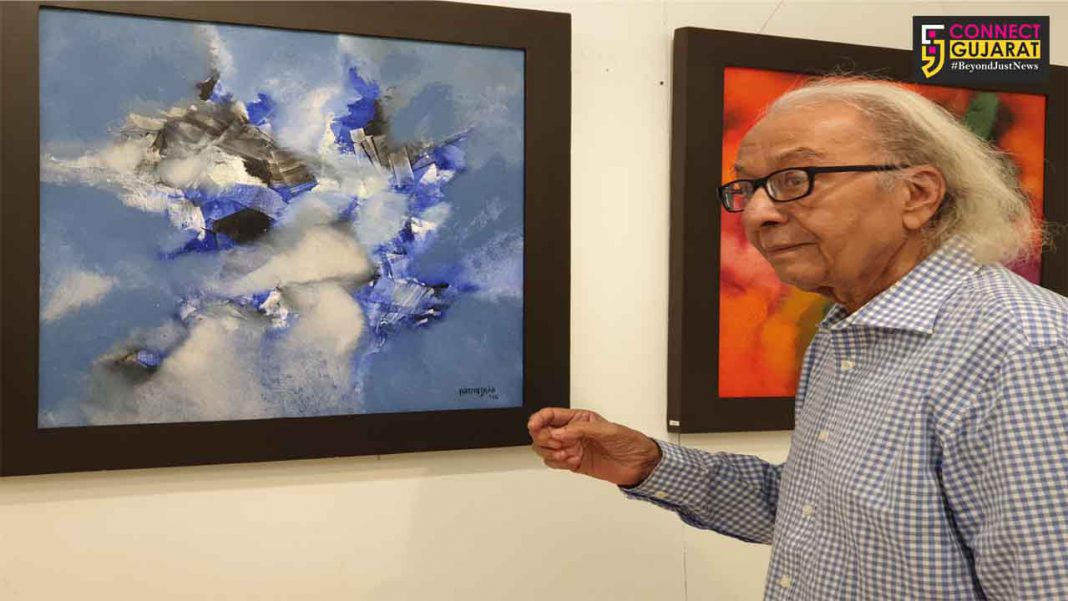 Series of Paintings shows artist rejoices to the ragas

Titled as ‘Spectrum of Ragas’, it is one such series of paintings in oil shows the artist rejoices to the ragas – Bhairavi, Megh Malhaar, and Jayawanti and goes on to create his musical interpretation of these ragas in a bright colour palate.

Shah remarks: “Painting is a blank canvas, it goes on…start music, also goes on… I was always knowing where to stop so I would never go off track. Basically my work is an abstract painting but I have a very strong feeling about work that what is created on completion, should give pleasure to the people. It is not a conscious effort but happens on its own. It is a visual feast and is important for the viewers.”

Bhanu Shah is a 86 year old senior artist and is fondly known as Ahmedabad’s KITE MAN. The world famous and the only kite museum in India, is his creation. He also made a WALL MURAL at the VUDA CIRCLE in Vadodara.

Born in 1935 in Ahmedabad Bhanu Shah graduated in Fine Arts from the MSU in 1956 and then proceeded to complete a post-graduation Diploma in Museology.

Expert Dr. Kanika Mondal done lots of research to get the inside story and the work of majestic painter. She shared, Shah began his journey as an abstract artist in 1956 and in the next 6-7 years were spent acquiring the skills of a landscape artist. Then in 1961, he became the founding member of the Progressive Painter’s Group of Ahmedabad. After this, Shah left landscape paintings and switched to semi abstract paintings and eventually to abstract paintings. In 1965, Shah had his first one man show in India at the Taj Gallery and from there on his works were greatly appreciated in Mumbai. Eventually, Shah switched to abstract, then to collages and finally to a whole series of his paintings created with the Ragas, which still remain his most celebrated and distinguished creations.

In the following decade, from 1960’s onwards, Shah devotedly listened to music, especially Hinstustani classical by Ajay Chakrabarty. Music has always had its impact on him. But Shah never wanted to transform music into painting. He believed “listening to music continuously not knowing what was to happen and only getting emotionally infused by the happenings but nurturing the desire to interpret the music into his paintings.” The artist continues “the pleasure of listening and painting was even more than the pleasure of listening”. Apparently, one can read the influence of music both consciously and subconsciously in the artists’ works.

“Bhanu Shah, in his long career spanning around more than six decades, has had 30 solo shows and around 33 group shows to his credit. His most significant contribution as an artist was his solo show of 44 paintings in Auckland, New Zealand, the proceeds of which went on to the Child Cancer Foundation. He is also the recipient of many prestigious awards including a National Award from the Lalit Kala Akademi in 1968, Gujarat Samman by Govt of Gujarat in 2004 and the Senior Fellowship by the Department of HRD, Govt of India, in 1994-95,” says Dr. Kanika while giving the brief about the celebrated artist.

Besides pursuing an active career as an artist, Bhanu Shah also pursued his dream of collecting kites art kites from various parts of India for over 40 years. The collection eventually took the shape of the ‘Kite Museum’ in Ahmedabad. The museum is built by Le Corbusier, and has received worldwide acclaim. Shah has travelled thrice to France, and several times to Dubai and Bangkok, to fly kites as an Indian representative. Bhanu Shah is fondly known as Ahmedabad’s Kite Man. Besides, the artist and kite collector is also a poet and has published two books of his poems.

Bhanu Shah’s association with the city of Baroda is long standing. Shah, besides earning his graduate and post graduate degrees from Baroda the artist has also made a mural at the VUDA Circle, Vadodara.