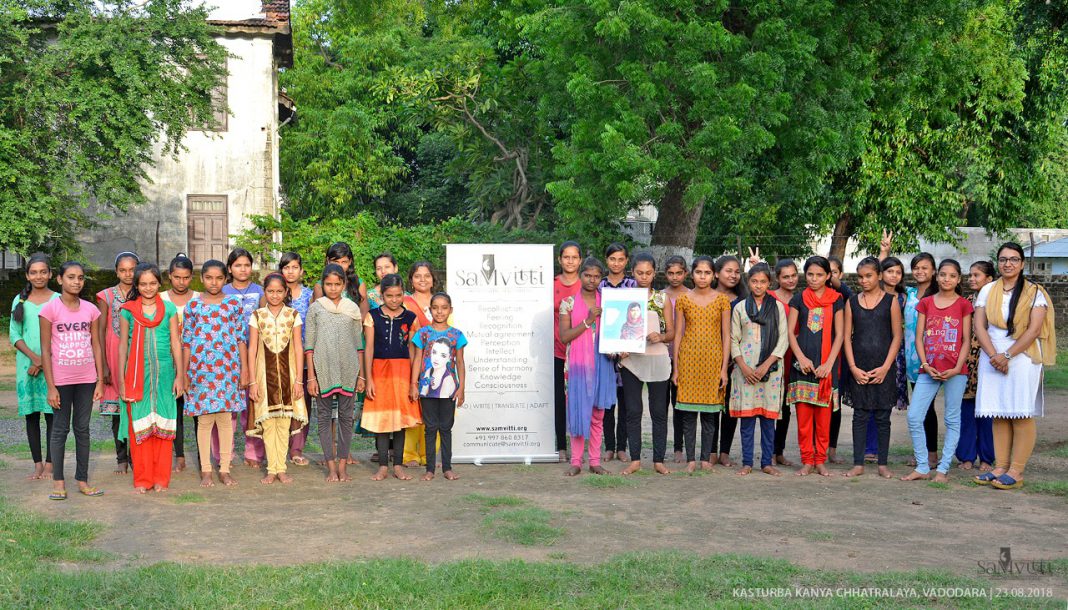 Continuing its objective to connect women with literature and culture the SaMvitti Foundation organised a session on real story of the youngest Nobel laureate ‘Malala Yousafzai’ in Vadodara. The story was shared by Chaiti Vinod Salunke with young girls of Kasturba Kanya Chhatralaya and made the participants understand their basic rights as citizens and and fight for one’s rights.

Malala Yousafzai was born in Mingora, Pakistan, located in the Swat Valley, on July 12, 1997. She attended the school that her father, Ziauddin Yousafzai, had founded. After the Taliban began attacking girls’ schools in Swat, Malala gave a speech in Peshawar, Pakistan, in September 2008. The title of her talk was, “How dare the Taliban take away my basic right to education?” In early 2009, Malala began blogging for the BBC about living under the Taliban’s threats to deny her an education.

With a growing public platform, Malala continued to speak-out about her right, and the right of all women, to an education. Her activism resulted in a nomination for the International Children’s Peace Prize in 2011. That same year, she was awarded Pakistan’s National Youth Peace Prize. Malala and her family learned that the Taliban had issued a death threat against her because of her activism. On October 9, 2012, when 15-year-old Malala was riding a bus with her friends on their way home from school, a masked gunman boarded the bus and fired at her, hitting Malala in the left side of her head.

The shooting left Malala in a critical condition. She was flown to a military hospital in Peshawar. A portion of her skull was removed to treat her swelling brain. To receive further care, she was transferred to Birmingham, England. Malala was taken-out of a medically induced coma, though she had to undergo multiple surgeries including repair of a facial nerve to fix the paralyzed left side of her face. In March 2013, she was able to begin attending school in Birmingham. The shooting resulted in a massive outpouring of support for Malala. Unfortunately, the Taliban still considers Malala a target, although Malala remains a staunch advocate for the power of education.

On October 10, 2013, in acknowledgement of her work, the European Parliament awarded Yousafzai the ‘Sakharov Prize for Freedom of Thought’. In October 2014, at the age of 17, Malala Yousafzai became the youngest person to receive the Nobel Peace Prize. In April 2017, United Nations Secretary-General Antonio Guterres appointed Malala as a U.N. Messenger of Peace to promote girls education. Malala was also given honorary Canadian citizenship in April 2017. She is the sixth person and the youngest in the country’s history to receive the honour.

The participants were awestruck by the courage and determination showed by Malala. The session make them identify that one needs to listen to their inner voice-just like Malala for the benefit of girls who are denied their basic right to education. The participants attending the session have agreed to write a letter to Malala and showed eagerness to view her documentary and read the Hindi translation of her book, ‘मलाला हूँ मै’ by Suman Bajpayee.