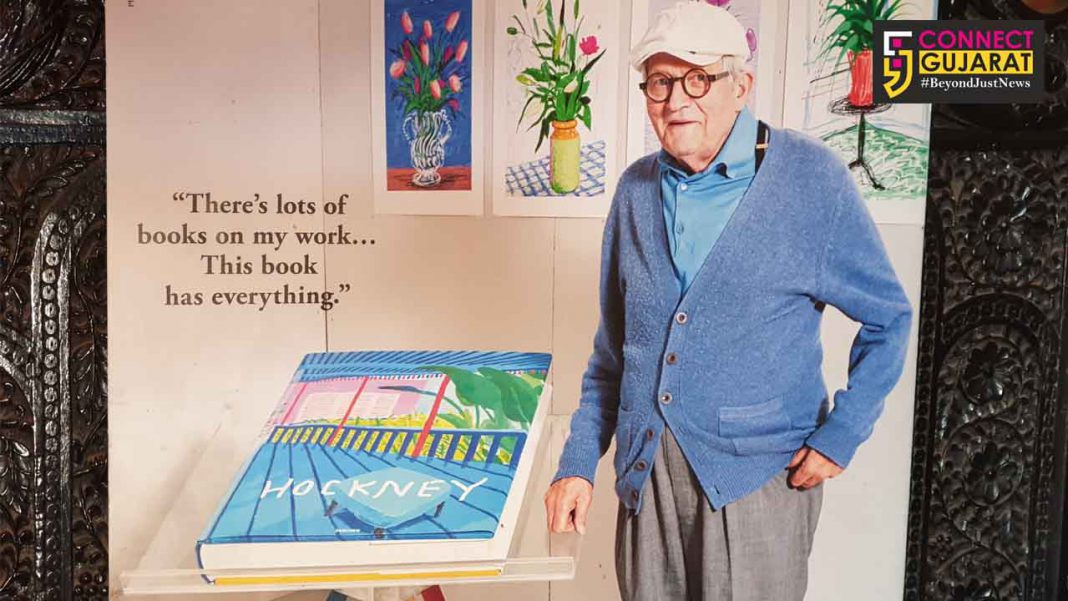 Sarjan Art gallery in Vadodara is now a proud owner of the signature series limited edition book of famous artist David Hockney. The book DAVID HOCKNEY ‘s SUMO is launched and kept for preview for a day for the visitors to witness the artist love and passion for painting.

In the words of expert Dr. Kanika Mondal, Sumo is A UNIQUE book that stocks  more than  60 years of works by the artist. The book has 450 works in 498 pages and weighs around 35 kgs. The 2.5 ft long and 2ft tall book is a limited edition of 10,000 numbered copies, each signed by DAVID HOCKNEY and an exclusive collection for any art collector.

David Hockney’s Sumo, The Bigger Book with adjustable bookstand designed by Marc Newson is on display at the gallery after the launching. The paintings of the artist caught the eyes of the visitors as they reached out to see the near realistic images made by the artist. One of the main feature of the book is the 1972 painting “Portrait of an Artist (Pool with Two Figures)” sold for whopping 672 crores in America and become the most expensive work by a living artist ever to sell in auction.

TASCHEN’s first ever SUMO publication for a painter, A Bigger Book is a majestic visual survey of David Hockney’s art. In it, Hockney takes stock of more than 60 years of work, from his teenage days at art school up to his recent extensive series of portraits, iPad drawings, and Yorkshire landscapes. Never before has Hockney’s oeuvre been published in such scope, with such investment from the artist, and on such an astonishing, immersive scale. It features over 450 works drawn from all stages of Hockney’s 60-year career, beginning with a self-portrait from when he was just 16, way back when he was studying at the Bradford School of Art in 1953. Hockney and co-editor Hans Werner Holzwarth spent a year selecting and sequencing the included works. The publication went through 19 proof versions and 12 dummy copies before it was perfected.

She further added that, This isn’t Taschen’s first rodeo with larger-than-life publications, a genre it pioneered with the 1999 monograph Helmut Newton SUMO, which, according to the Guardian, was the largest book produced in the 20th century. A Hockney SUMO has been a dream of Taschen founder Benedikt Taschen, Hockney’s good friend and Los Angeles neighbour, ever since.

The 498-page book includes 13 fold-out sections, and highlights Hockney’s artistic virtuosity in a wide range of styles, in paintings, photographs, prints, iPad drawings, and more. Among the highlights are a selection of Hockney’s famed portraits, currently the subject of “David Hockney RA: 82 Portraits and 1 Still-life” at the Royal Academy of Arts in London.

David Hockney born on 9 July 1937 is an English painter, draftsman, printmaker, stage designer, and photographer. As an important contributor to the pop art movement of the 1960s, he is considered one of the most influential British artists of the 20th century. Born in Bradford, England, in 1937, David Hockney attended art school in London before moving to Los Angeles in the 1960s. There, he painted his famous swimming pool paintings. In the 1970s, Hockney began working in photography, creating photo collages he called joiners.

The book is a limited edition of 10,000 numbered copies, each signed by David Hockney.