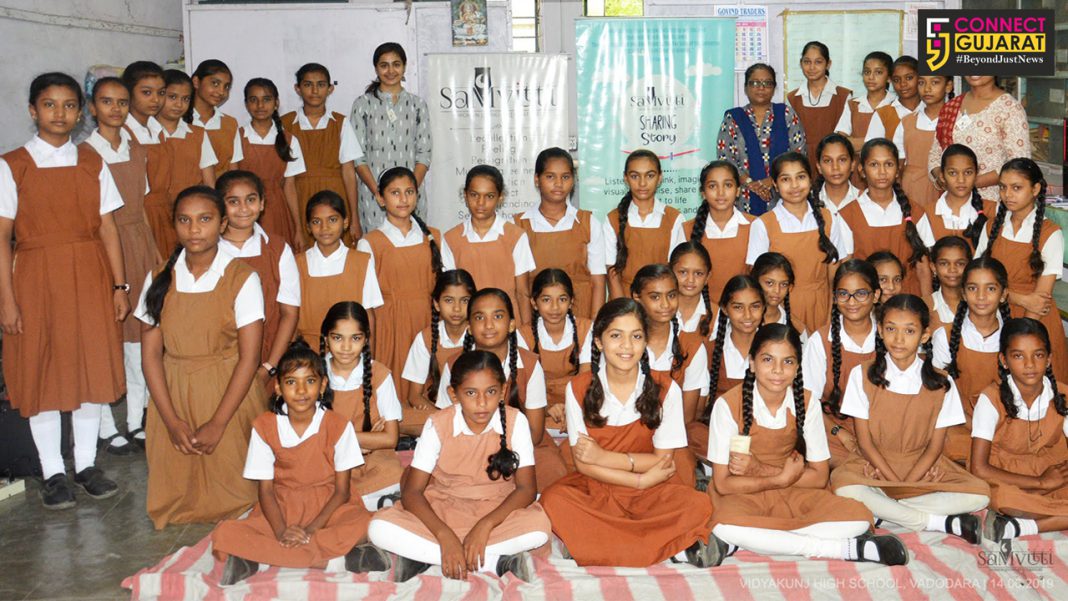 Gives important lesson about accepting mistakes and learn from them

Everyone makes mistakes, but one must not shy away but accept their mistakes and learn from them. SahityaMitra Muskaan Lulla shared the story ‘The Magic Mirror’ with SahrudayMitras of Vidyakunj High School (Vadodara) giving them a important lesson in life.

The session started with an ‘Omkar’, a shloka and a prayer. Muskaan posed a question at the beginning asking “if anyone has been hiding their mistakes of not doing their homework?” She then asked about the different countries of the world, and took the narration to Europe, Spain and to a small kingdom called ‘Granada’.

The story began with the narration of the King of Granada who was looking for a Queen, but with one condition – any woman who wishes to marry him has to look into a ‘magic mirror’. The idea behind this unusual condition was that the Queen had to be a nice person and very clean at heart. The women seeking to be the Queen, if untruthful shall have blemishes on their face once they look in the mirror. This condition makes things tough for the King as he was unable to find a suitable match.

One day, as the King was losing hope of finding someone, a young shepherdess agreed to look into the mirror. As she looked in there came no spots on her face. On seeing this, the other ladies snatched the ‘magic mirror’ from her and looked in it to find no spots on their faces as well.

In the end it was revealed that there was no magic in the mirror. But because the other ladies had doubts on themselves, they were reluctant to look in.

At the end, SahityaMitra concluded by saying what the sheepherdess said, “Everyone makes mistakes, but one must not shy away but accept their mistakes and learn from them.”

The Sahrudays were deeply engrossed in the tale wherein they looked forward to know how would the King get his Queen who has made no mistakes in her life. The Sahrudays were then asked to draw and colour a girl’s face and write about a mistake that they have made and what they learnt from it.