Connect Gujarat
#Beyond Just News
More
Home Gujarat SaMvitti organised a session on the story of Tana Riri at Mahila... 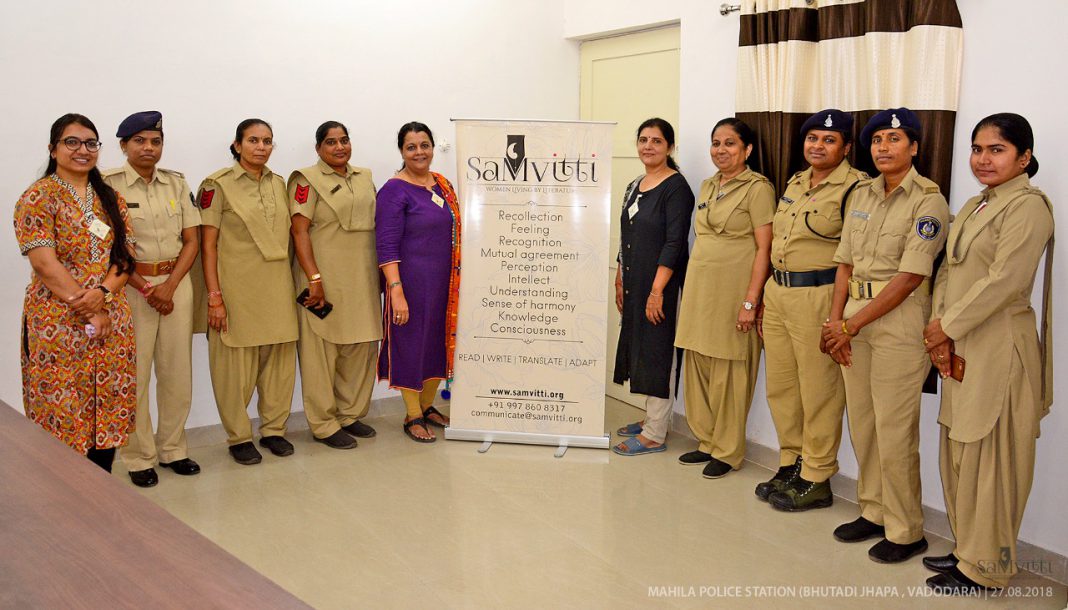 Participants became compassionate after listening the tale of two sisters

SaMvitti foundation organised a session on the story of Tana- Riri at Mahila police station in Vadodara. The participants evoked a sense of compassion after listening the tale of two sisters.

An adapted story of Tana-Riri from a film by Geetachitra was narrated with lot of pride and enthusiasm by Shreya Sanghvi Shah accompanied by singer Anupa Pota to the women staff-members of Mahila Police Station.

Tana-Riri is an Indian story about two Gujarati-Nagar sisters born around 1564 and brought-up in a North Gujarat town, Vadnagar. Both the girls were beautiful, smart and very good singers of Indian classical music. It was the time of the Mughal rule when Akbar was the Shahenshah-E-Hind. Akbar in his court had 9 extraordinary men known as ‘Navratnas’ comprising of Abu’l-Fazl, Raja Todar Mal, Abdul Rahim Khan-I-Khana, Birbal, Mulla-do-pyaaza, Faizi, Fakir Aziao-Din, Raja Man Singh-I and Tansen.

Tansen was a prominent figure of North Indian (Hindustani) classical music. He had a deep understanding of rāgas which brought him close to King Akbar. This closeness was not taken positively and many felt jealous of it. Tansen was so skilled that he could light lamps by singing ‘Rāga Deepak but whenever he sang ‘Rāga Deepak his body experienced a burning sensation from within. The jealous court-members on knowing this, conspired against him and convinced King Akbar to order Tansen to sing ‘Rāga Deepak.

Tansen follow the King’s order and began singing ‘Rāga Deepak. But, on singing so, the burning sensation that he experienced within affected him adversely and his body began to lose its charm. King Akbar soon realised his mistake, but it seemed too late now as there wasn’t any way to cure Tansen’s agony. Considering it to be his last days of life, Tansen decides to visit different places in India.

As the news of Tansen’s condition reaches Vadnagar, people in the field of art and music feel sorry for him. Tansen, in his visits to different parts of the country is eagerly looking for someone who can find a cure for his suffering. One day he reaches Vadnagar.

That very morning, as per daily routine, Tana and Riri go to fetch water from the well. Tansen sees the girls and asks them to give him some water to drink. But, even after drinking 2 pots of water, he still felt thirsty. Tana and Riri soon realised that the man was none other than Tansen himself. The girls rush home and mention this incident to their father. Their father, on learning about Tansen being in Vadnagar pays him a visit. On meeting Tansen he finds out that Tansen would feel better if someone sang ‘Rāga Malhar and brought rain.

The father tells Tana and Riri about this conversation. Both the girls agree to sing ‘Rāga Malhar the next morning. The power of their singing was such that it began to rain cold water which soothed the burning sensation that Tansen was suffering from. In a few days, when Tansen felt better, he left Vadnagar and went back to Delhi Sultanat.

After hearing about Tana and Riri and their singing abilities, Akbar was thoroughly impressed and decides to have both the girls sing for him in his darbar. He sends one of his men to bring these two girls to Delhi Darbar. Tana and Riri refuse to accompany and state that they would prefer to sing in front of God and not in front of the Akbar at Delhi Darbar. King Akbar could not accept this refusal and out of rage sends a platoon to conquer Vadnagar. Tana and Riri feel that this misfortune has come upon Vadnagar because of them, so both decide to jump in the well and sacrifice their lives for the town, for their culture and for their beliefs.

The songs sung by Anupa Pota during the session are

The tale of two sisters evoked a sense of compassion in the participants. They felt that as a King Akbar could have respected, appreciated and supported their singing skills rather than forcing them to be a part of his durbar and sing in front of the court members.

At the end of the session all the participants visualized, if the same incident happened in the current scenario, what would have been the possible outcomes?