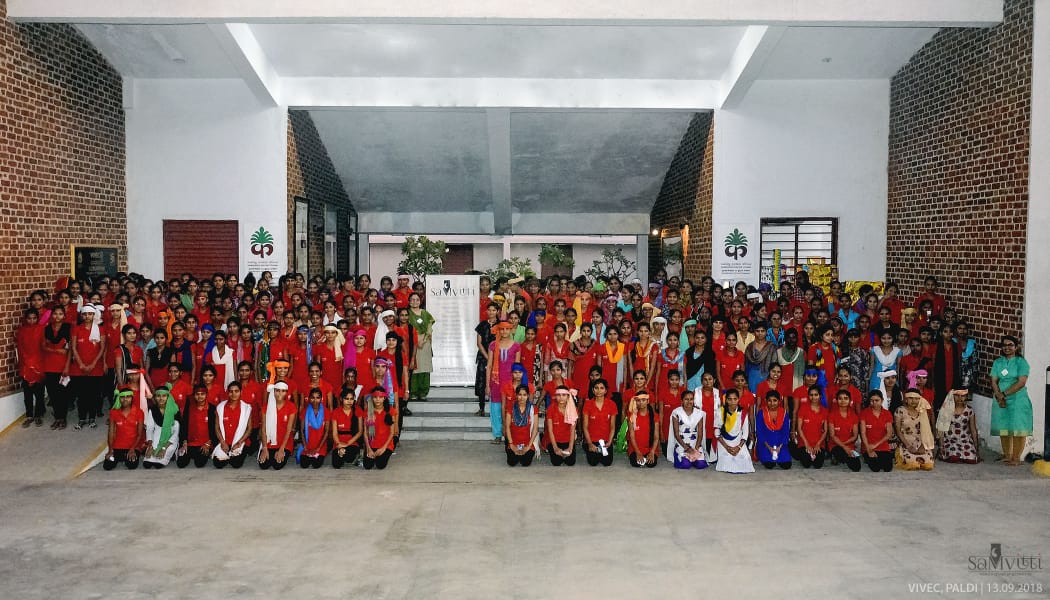 Nowadays its tough to talk about ideal human being and the relationships as in the present scenario we cant find such examples. However we still have our ancient literature to follow and implement in our lives.

SaMvitti foundation organised a concluding session of ‘Sudama Charitra’ by Narsinh Mehta. The session was explained by resourse person Darshini Dadawala to the
young tribal girls of Shroffs Foundation Trust (VIVEC | Paldi – Vadodara). The session effectively showed the nature of ideal human beings and the relationships they are engaged with.

The narration took the participants into the conclusion of the classic text ‘Sudama Charitra’ by Narsinh Mehta. The text says finally Sudama agrees to meet Krishna and reaches Dwarka. He stares with amazement at the magnificent palace with massive gates and asks the guards to inform Krishna of his arrival. Krishna, as-soon-as he gets to know of Sudama’s arrival, runs excitedly (bare-footed) to greet his childhood friend.

Krishna, so overjoyed by the news of his friend’s arrival, forgets about him being a King and maintaining his regality. On reaching at the gate, Krishna couldn’t find Sudama there so he looks for him and finds him on the streets of the town and fondly embraces him. Krishna brings Sudama into the palace with all respect, offers him his seat and in traditional fashion, washes his feet which were bruised with thorns from the long walk.

Krishna then takes some of that water and sprinkles it over his own head. He then offers Sudama food and drink to refresh him after his long journey. Sudama on seeing Krishna’s humbleness and hospitality is overwhelmed and gets emotional. Krishna and Sudama then get seated on the bed and relive their childhood days of all the adventures they had together. Krishna’s mood then turns jovial and with a mischievous glint in his eye, he asks his friend what the latter had brought him as a gift and if his wife had packed some nice eatables.

Sudama feels hesitant to offer Krishna ‘Tandul’ (half seeds of rice) and Krishna gets to know that Sudama is hiding something. He finds the packet and enthusiastically opens it and is very happy when he sees the contents inside it. Krishna grabs a handful of the ‘Tandul’ and happily eats it up. When he tries to put in a second mouthful though, his wife Rukmini, the Goddess of Fortune, holds his hand and shakes her head ever so slightly. She meant to tell him that with one handful of the rice, Sudama would become extremely wealthy in his present life. But with a second handful, he would continue to reap riches even in his next life.

Krishna understood what Rukmini was trying to tell him and, with a gentle smile on his lips, keeps aside the packet of Tandul. He then feeds his friend a lavish meal, asks him to rest for a while and then spends some more time talking with him. Sudama, in the meantime, is in a state of transcendental bliss and so, actually forgets the reason why he had come here in the first place.

He spends the night at the palace and leaves for his home early next morning. Krishna lovingly bids him farewell, though he doesn’t offer him anything in material terms. On the way, Sudama is completely happy and absorbed thinking of the wonderful time he had spent with the Lord.  As he nears his home, Sudama is dismayed to see that his humble little cottage is missing. In place of that is a large, gleaming palace, made of gold, stones and jewels. Krishna had asked Vishwakarma to build a palace at the place of Sudama’s hut. But while doing so, Sudama’s wife regrets for the same saying, “She cannot live in a palace while the people of her village lived in poverty.” Krishna is impressed and gets palaces built for all the residents of the village.

Participants connect with the ideal example of friendship and many other relationships, like, as a wife they found Sudama’s wife as ideal. Participants expressed various emotions throughout the session with most of them had tears in their eyes while watching the dramatic adaptation of the scene where Sudama and Krishna embrace each-other.

They expressed joy when Sudama’s kids were happy living in the palace and loyalty and dedication when Krishna served Sudama beyond his boundary of dignity and also at the time when Sudama’s wife had regretted to create the palace. The whole experience right from the first ‘kadva’ to the conclusion incited a sense of deep friendship and reinforced the fact that honest affection, love and loyalty communicates beyond spoken words.