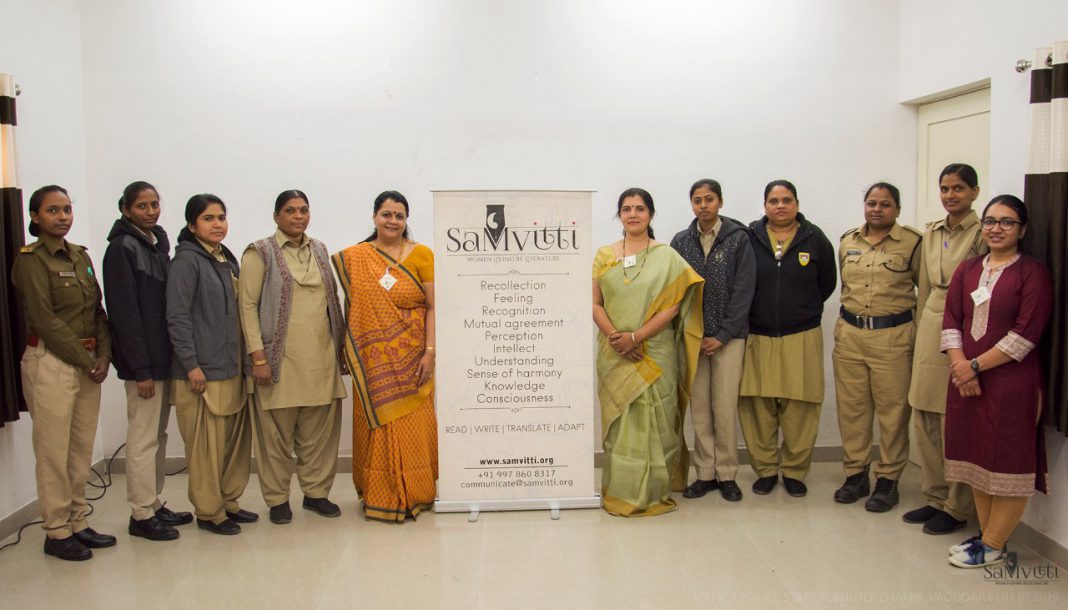 For SaMvitti ‘Sharing Story’, SahityaMitra Shreya Sanghvi Shah accompanied by SahityaMitra Anupa Pota shared the story ‘Gangasati and Panbai’ by Swami Brahmvedantji with the women staff-members of Mahila Police Station in Vadodara. The session was conducted by SaMvitti Foundation.

Shreya Shah narrated the story of Gangasati starting from her birth who was a devotee and a poet from a village in Saurashtra. She was born in to the family of Bhaijibhai Sarvaiya and Rupalibaa in the village called Rajpara near Palitana. She was known as Hirabaa in her childhood. Panbai was also born in the same village in the family of Hamirbhai Khavaas. Both the girls were of the same age and religion. On the other hand, a child named Kahalsang was born in the family of Vakhatubaa in the village near Bhavnagar. He also was a devotee. One day, a great saint came and inspired Kahalsang to live a supernatural life.

Then Anupa Pota sang a bhajan followed by Shreya Shah went on with the story. As Kahalsang was at the age where his parents wanted him to get married and take all the social responsibilities, his parents started searching a bride for him and found Gangasati. In 1864, both, Gangasati and Kahalsang got married but Panbai got upset with Gangasati’s marriage.

In that era, there was a rule to send a girl who can help the bride in her household work. With the permission from Panbai’s parents, Panbai went alongwith Gangasati. The couple, Gangasati and Kahalsang used to enjoy devotion and praying to God. Panbai also got involved and started enjoying devotion along with the couple. Kahalsang had that power of knowledge to help people in their difficult time.

People, who were jealous of him, once came with a cow that had died of snakebite and challenged Kahalsang to bring her back to life. He took the challenge and put life back into the cow. When he returned home, Gangasati was not happy by his deed. She said, there is a difference between devotion and achieving something.

Listening to this, Kahalsang decided to take ‘samadhi’. As a wife Gangasati also decided to go along with him but Kahalsang pointed that Panbai has dedicated her whole life for them and she too is in search of her inner self so it was their moral duty to give her a feeling of completeness.

January 21, 1894, Kahalsang took ‘samadhi’. From the next day, Gangasati started to guide Panbai for devotion. Gangasati used to create a bhajan every day and explain with all love to Panbai. March 15, 1894, Gangasati left the world. Now, Panbai was feeling alone though she had accepted the truth but after three days on March 19, 1894, she also died. When the time came of separation between Panbai and Gangasati, Anupa Pota sang one more bhajan. Even today, the bhajans of Gangasati are sung.

At the end of the session, all the participants along with both the SahityaMitra sang the bhajan which means to engage with your inner-self in a very short life-span.

Appeal from Ministry of Railways to passengers

HM Amit Shah speaks to all Chief Ministers, seeks their views on future strategy in fight against Covid 19

Appeal from Ministry of Railways to passengers

29 May – Know your today’s horoscope