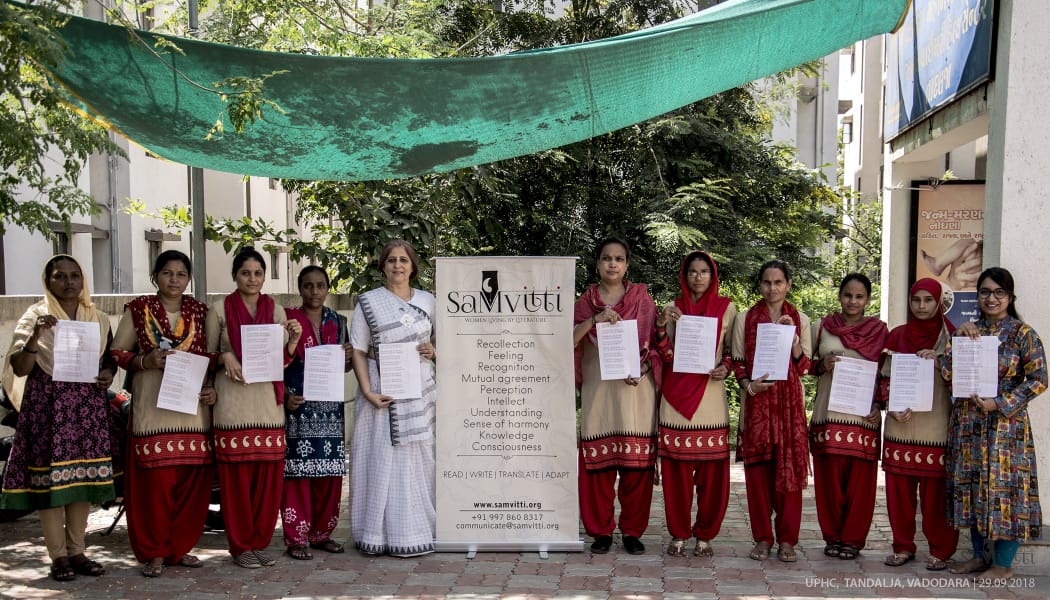 Emotional story of ‘Ba’ fill the session with compassion

The story titled ‘Ba’ written by Chandravadan Chimanlal Mehta was shared and performed as a monologue by SahityaMitra Neha Sanghani gives the moments of compassion inside the women members of Urban Primary Health Centre of VMC in Vadodara. The sombre setup of a bed lying an ailing man on the bed with few medicines gives the perfect setup of the story.

The session started with a song dedicate to the parents and continued further with the introduction of the main characters – an ailing son, a doctor, a nurse, a young man (the second son), a servant and an old woman (Ba). The doctor enters in the room to check the patient and discovers that the patient has passed-away. Though pondering over it for some time, he is unable to identify the reason behind the death.

Then accidentally the nurse happens to see a bottle of sleeping pills which is half-empty. On knowing that, and realising it not being a natural death, the doctor calls the police. The police draw a ring of suspicion on, firstly the servant, then the nurse and then the other son. But due to lack of enough evidence, the police aren’t able to place the blame on any of them.

As the mystery tends to get more intriguing, Baa reveals that she is the one who gave the sleeping pills to her son as she could not see him go through so much pain and wanted to relieve him. After the confession, Baa recollects her son’s childhood memories and shares the precious moments lived with him from his birth to his treatment of cancer. At the end Baa dies as she too took the sleeping pills after giving it to her son as she realised that she won’t be able to live-on with the guilt.

The participants first answered that the son himself may have taken those pills as he may not have been able to bear the pain of the treatment or he may have felt sorrowful to see his mother in pain because of his suffering from cancer. But when they came to know the exact reason they realized the pain of a mother and the act of allowing her son to let go from her.

At the end of the session the moral aspect of the story was discussed, whether it was right or wrong to give the sleeping pills to the ailing son. The participants also shared such incidences from their family and their views on mercy killing.