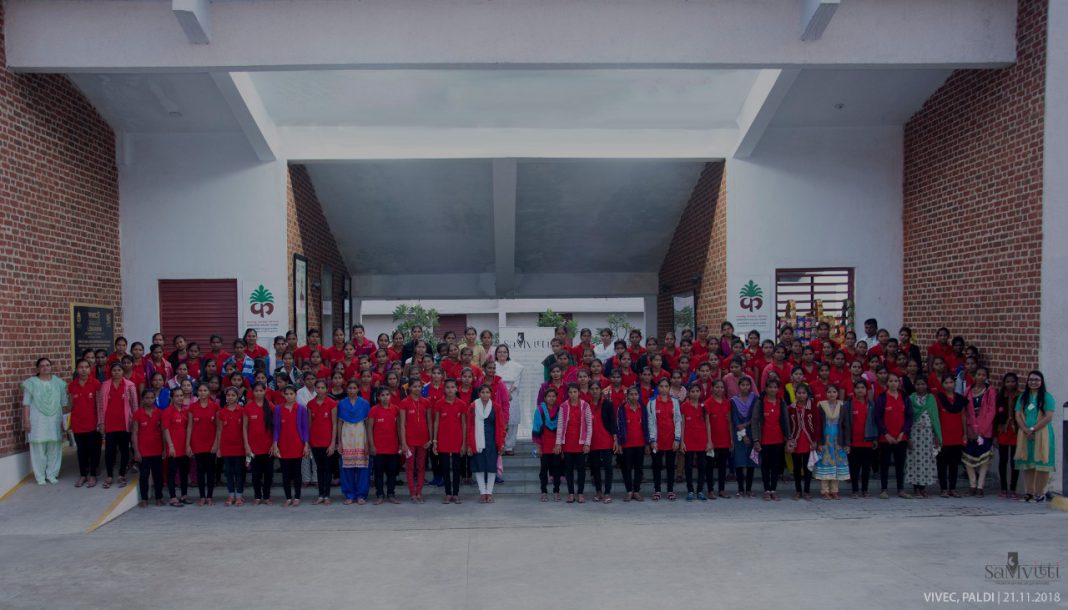 Marriage is a important moment of every girl’s life and she only can know the emotional state of her mind which is joyful as well as missing her home. With same feelings SahityaMitra Darshini Dadawala shared a self authored story ‘Lagna ni Vela’ with tribal girls of Shroffs Foundation Trust’s Vivekanand Institute of Vocational & Entrepreneurial Competence (Paldi).

The session started with a short conversations related to marriage functions followed by the story of a friend’s marriage.

The story begins with a fictious character Komal wakes up in the morning. Like the creases on the bed sheet, (she) experiences the same creases in her mind formed out of her thoughts, and, on the instructions of her mother goes to get ready to spend time with the guests. While getting ready in her room, she suddenly feels everything unknown. Her cupboard refused to talk to her. On dipping her hand in a bucket of warm water, she gets burnt and experiences that pain deep within.

The room too seemed unknown to her. While having her bath, life from her childhood to the present moment, many occasions start floating in front of her eyes. To leave this house and everything connected to it seemed abnormal to her and just as the feet slip from the bathing stool, her mind wants to slip out of marriage.

While Komal is engaged in the daily routine in her room, sitting in the living room, the women-guests and friends start singing wedding songs, with that imagination. SahityaMitra also presented a traditional wedding song to the participants. After an emotional recital of the song by all, the composition in the voice of Diwaliben Bhil was collectively sung through which the participants were able to delve into the emotional depths of the story. After the song the narration of the story continued.

After getting ready, Komal reached to the kitchen to her mom. Her mom was making her favourite ‘ratalu na bhajiya’, on seeing that Komal got excited, but when her mom said, “Tomorrow you will be going to your in-laws’ house, that’s why I am making these ‘bhajiyas’ today.”, on listening to which Komal’s heart gets heavy. She got quiet, so her aunt said that when the daughter is going to get married, wouldn’t she be quiet or would she be skipping around? Her aunt asks Komal’s mom to recollect her initial days after marriage.

Komal wanted to ask her mom what she experienced when she first came to her in-law’s house after marriage. But, before she could ask, other women enter into the kitchen and start talking on other things which disappoints Komal, and she is longing to go and sit in a quiet corner of the house and she wished to listen to her inner voice but she feels uneasiness as the whole house is filled with hullabaloo. There are so many things to talk with mom… today when she needs to talk to her mom, her mom doesn’t have time… she is saddened.

To lighten-up her mind, she goes and sits on a sofa in the living room. Her cousin (sisters) wrap around her… You shall be going tomorrow… other women scold them and ask them to go away but Komal feels like going in the courtyard and playing hide-and-seek with her cousins… but it isn’t possible? Her restlessness increases.

Doorbell rings. The items for the kitchen have arrived from the grocery store. She goes to arrange them, but her mom stops her saying, she is going to leave, and when needed, the items won’t be found, this hurts Komal. While saying that, mom is peeling-away the skin of the ‘ratalu’, Komal feels as if she is being distanced away by her mom. She goes back to her room. Two large suitcases are readied to take along after marriage. On seeing them, a thought comes, that’s it, only this much is to be taken along?

There are so many things, memories and belongings in this house which she wanted to take along… especially her very well-nurtured garden. But how is it possible? She felt as-if her family members were celebrating her going away. She got sad. After completing the wedding ‘feras’, wearing a ‘mangalsutra’ and smearing ‘sindoor’, does she have to accept new people and with whom she has spent so many years, she has to forget them? A pearl necklace, as it breaks and all the pearls get scattered, Komal too felt scattered.

Mom came. She said that it’s time to apply ‘mehndi’. She is getting her mehndi done, but her mind is in a vortex of thoughts. She wants to talk to her mom and tell her that she doesn’t want to get married, but she is not able to (tell her). Her future husband’s name is written in a concealed way in the mehndi of her palm and is asked whether she will be able to find the name? But an altogether different question is troubling Komal, what about the names that were already written on her palm before applying mehndi which got covered by this mehndi?

As the girls were participating in Komal’s wedding as her friend SahityaMitra proposed that they should also apply ‘shukan ni mehndi’ which the girls readily accepted with great joy and in tandem with the visual of the movie Umrao Jaan’s popular song ‘Kahe Ko Byahe Bidesh’ the girls enjoyed the story by putting dots of mehndi on their friend’s palms, and the session concluded.

During the session, the girls emphatically passed through various emotional ups-and-downs. They experienced laughter, tragedy, beauty – and after enjoying the story the enthusiasm brimmed on their faces like shyful blush, which all could experience.