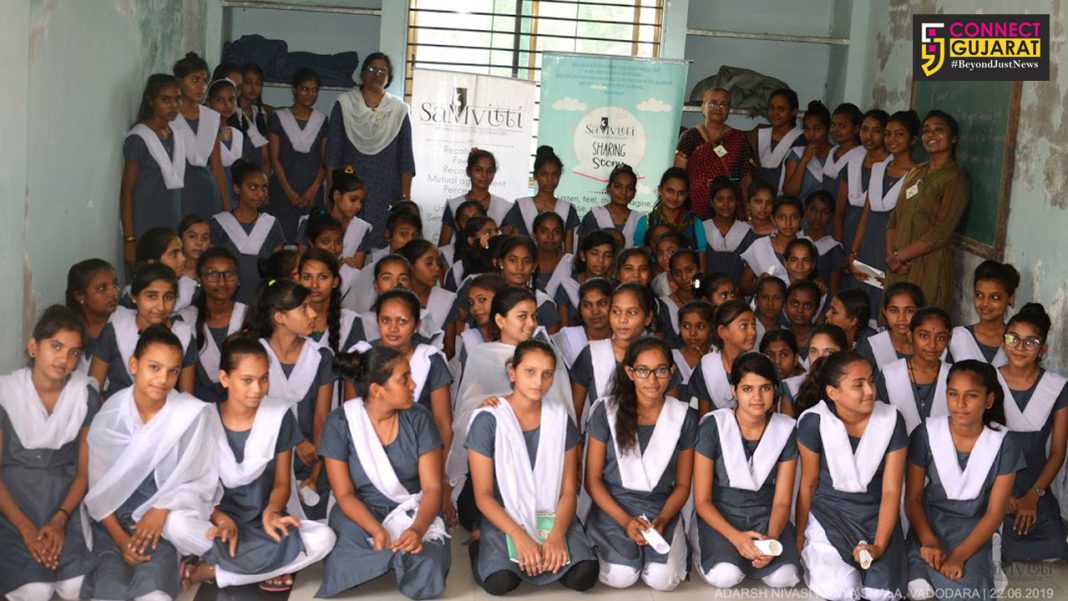 Gives the message about fight in achieving the goals

No matter how difficult the circumstances one must not give-up and give a fight to become victorious in achieving their goals. This is the lesson that SahityaMitra Bhavna Shah shared with the girls of Adarsh Nivasi Kanya Shala in Vadodara.

Bhavna Shah shared the true-story of accomplished Bharatanatyam dancer Sudha Chandran, ‘I Can Dance Again’, with the young SahrudayMitras of Adarsh Nivasi Kanya Shala. The session started with an ‘Omkar’ and a prayer.

Bhavna began her narration from the time when Sudha was 4 years young and highly passionate for ‘Bharayanatyam’. Her feet would by-themself effortlessly begin to dance on listening to music just like a stream which flows effortlessly. By the age of 16, she had given 75 stage performances.

One day, on her way from a temple, the bus she was travelling met with an accident and Sudha Chandran’s right leg gets ruptured. After the doctors discover that gangerene had formed on her right leg, they amputate it from 3 inches below the knee. Sudha Chandran on regaining consciousness after the amputation asks, “Can I dance again?” Subsequently, after regaining mobility with the help of a prosthetic Jaipur foot, she returned to dancing after a gap of two years and performed in India and various other countries.

After her return to stage, a dance biographical movie was made on her life, ‘Naache Mayuri’.The narration concluded by the facts about Sudha Chandran, who at this age too is active as a dancer, actor and a judge at dance competitions.

The Sahrudays understood that no matter how difficult the circumstances are, one must not give-up, but rather give a fight and become victorious in achieving their set goals.After the narration an interview of Sudha Chandran, ‘Baaje Payal’ from the archives of Doordarshan was screened.

In the end Bhavna by quoting Shudha Chandran from the interview, “I want to remove the word impossible from my dictionary”. It stated that the word ‘impossible’ itself says ‘I M POSSIBLE’.The Sahrudays were given an activity to write ‘Who Am I’ – their deeper understanding about themselves.