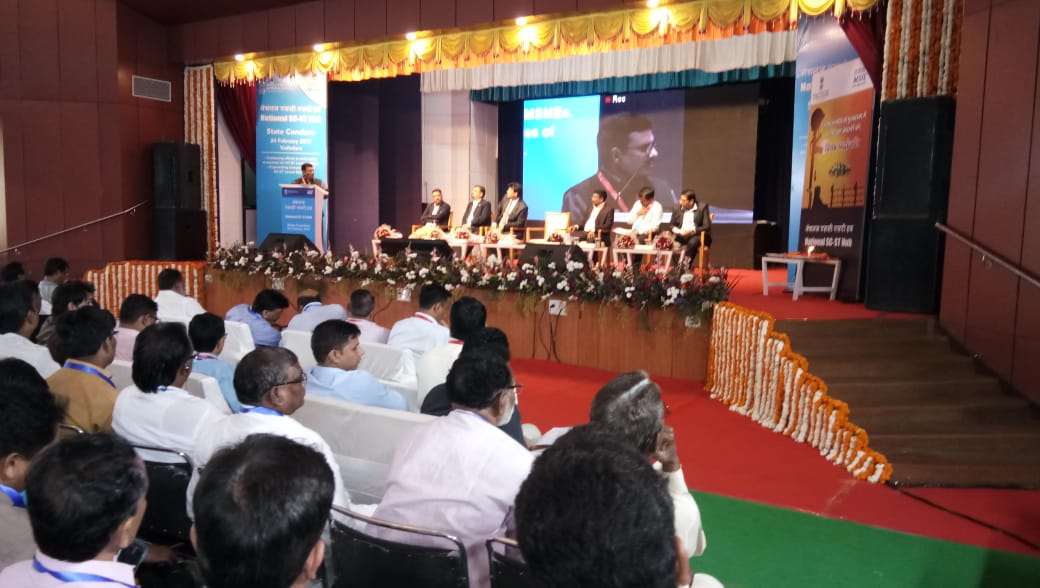 Defence, Atomic Power and 16 major PSU’s participate in the seminar to promote the National Initiatives of Prime Minister for SC ST.

NSIC ( Ministry Of MSME) Government of India organised a Regional SC ST Conclave  on 24th ( Sunday) at ONGC Officers Auditorium in Vadodara for the benefit of the entrepreneurs. Defence, Atomic Power and 16 major PSU’s including the State Government, Ministry Of Social Welfare and Justice & IC participate in the seminar to facilitate and propagate the National Initiatives of Prime Minister for SC ST.

The Ministry of MSME designs policies and promotes/facilitates programmes, projects and schemes and monitors their implementation with a view to assist MSMEs and help them to scale up. National SC ST Hub (NSSH) is a significant initiative of the ministry to achieve ‘Sabka Saath’, ‘Sabka Vikas’ the vision of government for ensuing inclusive growth to which MSMEs are important vehicles.

A series of state conclaves under NSSH at 24 different cities have been planned across the country with the view to sensitise the SC ST MSEs procurement departments of central government of CPSEs banks and financial institutions. A state conclave was held in Vadodara to bring together the states of Gujarat CPSEs industry associations and state government on the common platform and deliberate upon steps to be taken to fulfil the mandate od public procurement policy for SC St entrepreneurs and also to build their capacities.

In order to work for the entrepreneurs from the SC ST community of the country that instead of seeking jobs is striving to generate employment through MSEs run by them. The ministry of MSME invited all stakeholders to this conclave for deliberations with a view to reach the last mile for the delivery of benefits of NSSH scehme.

The conclave provided excellenet opportunity to develop coherence with state governments and collaborate with Natinal SC ST HUB to achieve the larger objective. It is brought various important insights from CPSE’s industry associations to understand the gaps in realising the mandate of public procurement policy and put forth innovative strategies fir holistic development of MSEs owned by SC ST entrepreneurs.

“The seminar is to brief the SC ST entrepreneurs about the government schemes and invite them to the main stream. Government is working on the SC ST Hub and we want to give momentum to the public procurement policies to increase their purchase in the government sectors. In the last five or six years only .5% target is achieved against the 4% decided by the government and we went to increase the percentage. In Narmada and Dahod we run a campaign to turn their productions of bananas to wafers and turning the leaves into fibres,” said P.K. Jha Zonal General Manager Central Zone NSIC.

Prime Minister Narendra Modi, launched the National Scheduled Caste Scheduled Tribe Hub (NSSH) in October 2016. It is one of the flagship programmes under the Ministry of Micro, Small and Medium Enterprises and is being implemented by National Small Industries Corporation (NSIC). The programme endeavours to promote entrepreneurship amongst SC-ST community and enable effective participation of SC-ST owned MSEs in public procurement.

National SC ST Hub (NSSH) an initiative of the ministry of Micro, Small and Medium Enterprise GOI is a central sector scheme . It was launched by PM with an aim to create a supportive eco system for SC ST entreprenurs by assisting them in capacity building and thereby enabling them to effectively participate in public procurement process. Te scheme is organically linked to the Public Procurement policy 2012 of the GOI which states that 25% of total procurement of goods and services by central ministries, departments and CPSE’s shall be made from MSEs and 16% of such procurement (4% of total) from MSEs shall be made from SC ST owned . The National Small Industries Corporation (NSIC) a Mini Ratna CPSEs under the ministry of MSME is the implementing agency in the scheme of NSSH.