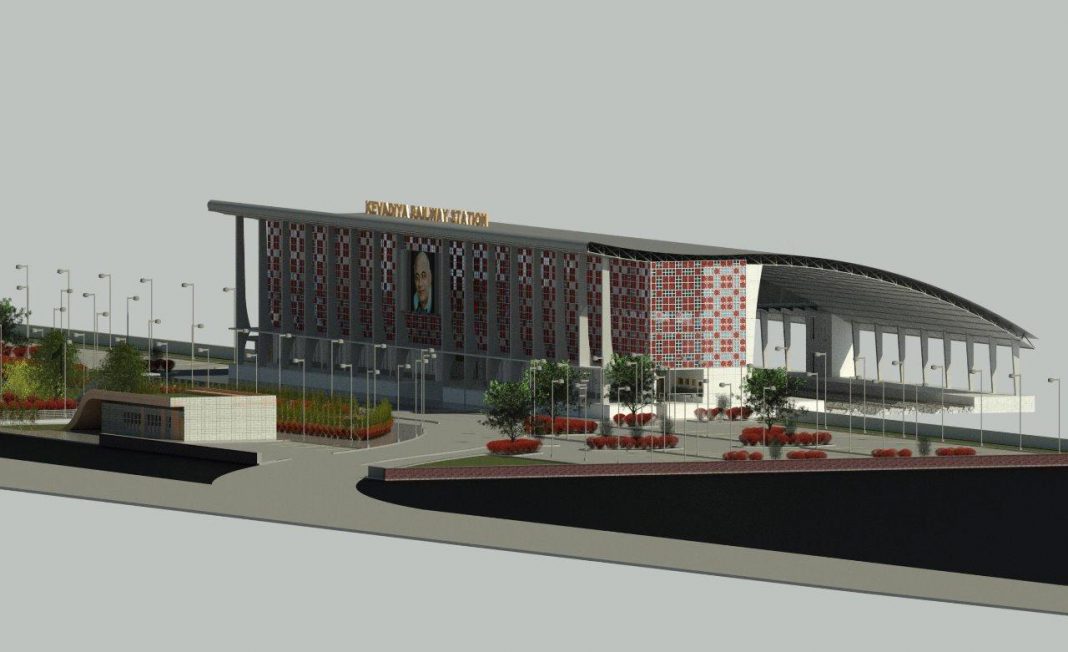 Kewadiya has been a site for tourists every monsoon when the dam overflows from the spillways. Now there is another reason to visit the place after the construction of the world’s tallest statue The Statue of Unity. Since it’s inauguration the inflow of tourists and people increases every passing day and the place is becoming a hot tourist spot.

To cater to the incoming flow of tourists, the government planned better connectivity to the region proposed for a railway station in Kewadiya. The station is estimated to be constructed at a cost of Rs. 20 Crores to provide world class facilities within and around the upcoming railway station premises.

The overall station building is 3 level structure covering around 110 m x 15 m plan area. The first level and second level are specifically covering all station building related facilities like station master room, General waiting room and VIP room. However, this station also has an Executive lounge that will add value in providing facilities required for VVIPs and foreign tourists. The third level has an Art gallery that will promote local and tribal art and craftworks.

The overall station building will be covered with Architectural space frame roof. This roof will ensure there will be protection from direct sunlight entering on platform and making it ambient zone for commuters. Further, the canvas under the roof will be used for laser lighting projections to make it interactive with the tourist commuters. The roof will also support large scale solar panel system.

The railway station is registered with the Indian Green Building Council (IGBC) for making it India’s First Railway Station to be certified as Green Building by IGBC since inception of construction. For an attempt to get Platinum certification, this railway station will involve sustainable design steps covering water management, sewage management, storm water management, solar panels, use of IGBC shortlisted materials, use of local available materials, rain water harvesting, performing energy analysis and use of LED lights and higher star rating electrical appliances.

This will be the first railway station in India with a green building certification from the first day of operation. For the same, the station houses the best of technologies, environmental conscious and aesthetical pleasing components integrated in the design of the building.

Some of the salient features of the Kewadiya Railway Station are

1) On site renewable energy generation –The station roof covering the railway tracks will be installed with solar panels with a potential of generating up-to 200 KW electricity.

2) Disabled and elderly friendly – The station will have special provision for disabled people such as ramps to wheel chair access, lifts and escalators for movement to different floors, disabled friendly washrooms on both sides of the railway station, amongst others.

6) Green design – The building is consciously designed which minimises the disturbance of existing eco-system on the site. The trees were saved during construction and more were planted. Recycled material such as fly-ash bricks, insulating glasses for air conditioned rooms, and local materials will be used in the building to reduce the overall carbon emission of the building.

Kewadiya town is situated on the banks of Narmada River.

The town is home to one of the largest multi-purpose hydro projects in India, the Sardar Sarovar Dam. It is a gravity dam, one of the thirty dams planned to be built on Narmada, and is the largest structure of them all. It is a source of water and electricity for four states of India, Gujarat, Madhya Pradesh, Rajasthan and Maharashtra. The dam was inaugurated on September 17, 2017 by Honourable PM Narendra Modi after it attained its final height of 163 mt.