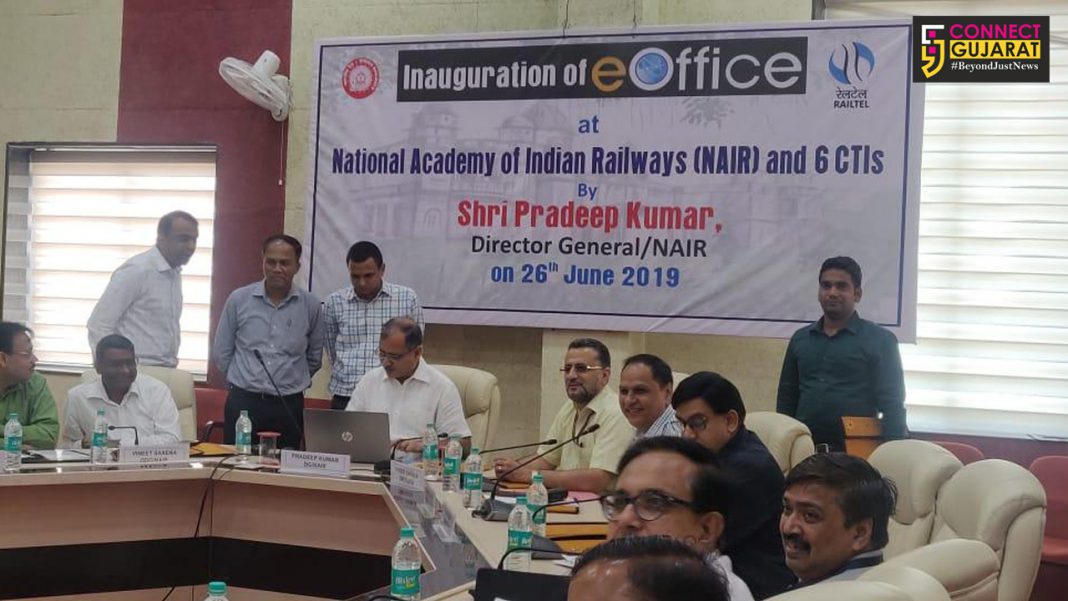 According to a press release by WR CPRO Ravinder Bhakar the effort is a giant leap towards shift from manual filing system to E-office for its day to day activities. Along with transparency the e-office also brings efficiency in everyday functioning. This will also promote green way of working by introducing paperless work culture in these 7 Training Institutes.

RailTel, a Miniratna PSU under Ministry of Railways, has taken up the work of implementing e-Office system for Indian Railways. e-Office project is a Mission Mode Project (MMP) under the National e-Governance Programme of the Government of India. The project aims to usher in more efficient, effective and transparent inter-government and intra-government transactions and processes.

Regarding the project Puneet Chawla, CMD/RailTel, said – ‘We signed a MoU with Indian Railways for Implementation of e-Office over Indian Railways under Phase-I project for 50,000 Users. We have already implemented e-Office system in South Central Railway (Zonal HQ and all 6 Divisions of SCR – Guntur, Secunderabad, Guntakal, Vijayawda, Hyderabad and Nanded) and Trichy Division of Southern Railways apart from the 7 CTIs within span of mere 3.5 months. Presently, 7692 Users under Phase-I Project have been registered in eOffice Platform.

Implementation work is on fast track, other Zonal headquarters and one division in each zone will be completed by Sep-19.’ E-Office is a cloud enabled software that is deployed/hosted from RailTel Tier III certified data centres at Secundrabad and Gurgaon.It is based on Central Secretariat Manual of e-Office Procedure (CSMeOP). This is a giant leap forward to digitize and achieve greater efficiency & productivity for the Indian Railways. The product is built as single reusable system by bringing together independent functions and systems under a single framework to enhance transparency, increase accountability and transform the government work culture and ethics.

Indian Railways is one of the largest employers of the country and its offices cover almost every part of India. Indian Railways till date is burgeoned with manual ways to handle office documents. This not only makes the process slow but consumes more energy on its workforce. To change the scenario and bring the digital culture in Railways, implementation of e- Office has started.

The aim of e-Office implementation is to provide reliable, efficient, and effective way to handle office files & documents.RailTel took the initiative to build access from ground up to enable unparalleled e-Office infrastructure once the project was assigned by Railway Board (Transformation cell).  Currently 4 modules (File Management System (eFile), Knowledge Management System (KMS) Collaboration & Messaging Services (CAMS) & Personnel Information Management System (PIMS) ) will be  part of the e-office system being implemented.

The benefits will be visible once the system is fully put to use and manual file system is stopped. eOffice will be a milestone in Digitization of Indian Railways and will continue to be tool to foster improved reliability, efficiency and productivity. It will bring benefit to millions of employees of Indian Railways. E-office promises enhanced transparency, increased accountability, data security and integrity, and promotes innovation by releasing staff energy and time from unproductive process & procedures. E-Office fosters paper-less culture which will not only save operational cost but also promote a green way of working.

Speaking about RailTel Corporation Bhakar said it is one of the largest neutral telecom services providers in the country owning a Pan-India optic fiber network covering all important towns & cities of the country and several rural areas. Along with a strong a reliable network of 46000+ RKM of Optic fibre RailTel has two tier III data centers as well. RailTel is at the forefront of providing nationwide Broadband Telecom & Multimedia Network in all parts of the country in addition to modernization of train operations and administration of network systems for Indian Railways.

With its Pan India high capacity network, RailTel is working towards creating a knowledge society at various fronts and has been selected for implementation of various mission-mode Govt. of India projects in the telecom field. RailTel offers a bundle of services like, MPLS-VPN, Telepresence, Leased line, Tower Co-location, Data center services etc, RailTel is a pioneer in transforming Railway stations into Digital hub by providing public Wi-Fi at major Railway stations. Currently 1600+stations are live with RailTel’s RailWire Wi-Fi.