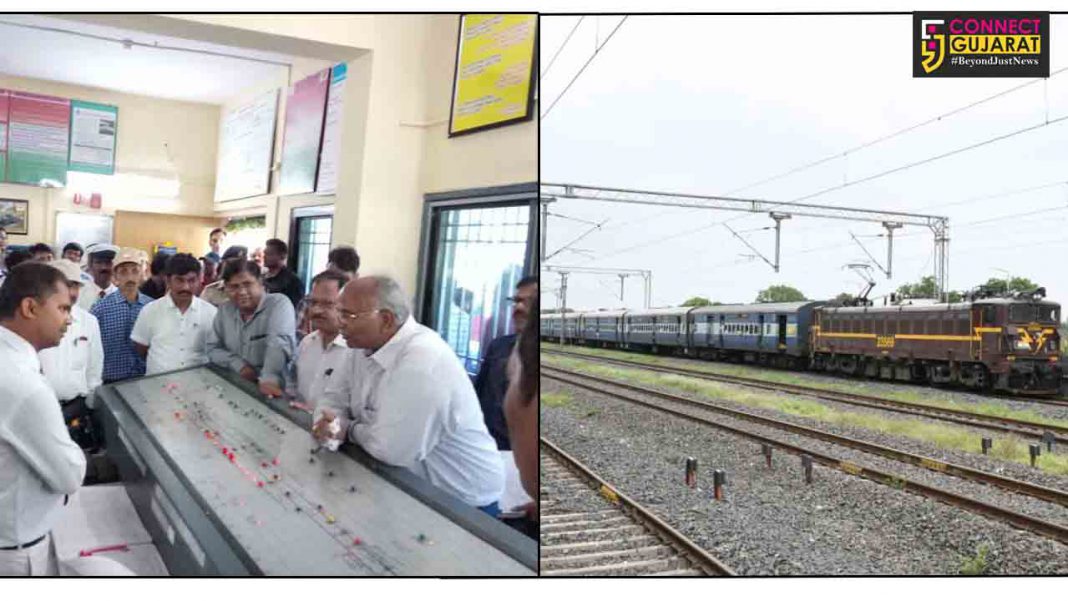 Indian Railways is moving forward in aspects of speed, progress, security, safety and prosperity and Western Railway is also marching ahead aiming to contribute as much as it can. Western Railway has achieved significant accomplishments and also many important railways projects have received momentum to improve infrastructure for a brighter future.

Many key rail projects have been put on the ‘fast track’,including the Doubling Project of Udhana-Jalgaon section under Mumbai Division of Western Railway. The project completed in record time and will now complete one year on coming 22nd July, 2019. The dualized Udhana – Jalgaon section has been functioning since 22nd July, 2018.

According to a press release issued by WR CPRO Ravinder Bhakar, commissioning of the doubling and electrification of Udhana – Jalgaon section has benefitted passengers, as well as freight at a large scale. The average speed of Passenger trains have increased from 50.55 kmph in 2018 to 55.72 kmph in 2019. The average speed of goods trains too has increased from 30.2 kmph in 2018 to 39 kmph in 2019. Capacity constraints for running additional trains have been removed. Line capacity utilization has dropped from 196% to 89.4%. Line capacity of this section has also gone up after augmentation of Universal Fail Safe Block Instrument (UFSBI).

Three holiday specials were also run from April 2019 for the benefit of passengers. The holiday specials which ran on this route were Train No. 82911/82912 between Udhana – Chhapra, Train No. 09027/09028 between Udhana – Barauni Jn & Train No. 09029/09030 between Udhana and Gaya. Uninterrupted directional movement has reduced running time of passenger and goods trains approx. by 1 hr and 2 hrs respectively. It has also helped in faster transit of passenger and freight traffic. 70 Mail/Express and 9 Passenger trains could be speeded up, thus saving total 2113 minutes and 174 minutes respectively.

On the freight front, the time of running of goods train between Udhana and Jalgaon has been reduced by approx. 7.30 hrs. The average speed of the goods train has been increased to approx 40 kmph from 24 kmph, which is almost double. There has been a reduction in detention due to enroute crossing of trains, which has led to an improvement in Wagon Turn Round and availability of wagon for achieving higher loading targets of Western Railway and Indian Railways.

The Electric Loco utilization has increased by 259 km from 551 km to 810 km in comparison from 2015-16 to 2018-19. The goods train which are interchanged with Central Railway i.e. trains sent to Bhusaval and trains received from Bhusaval which was 10 & 14 in 2015-16 respectively has been increased to 13 & 16 in 2018-19. The number of CRACK trains run on Udhana-Jalgaon section too has seen a considerable increase of above 188%. Super CRACK goods trains (Goods trains which save travelling time & crew, are called CRACK goods trains) are being run from Udhana to Jalgaon in 5.30 hrs (785 trains) and Maha CRACK goods trains are run from Valsad to Jalgaon in 7.30 hrs (19 trains). These trains were run with an average speed of 55.8 kmph in 2018-19, thus achieving 40% higher speed in comparison to normal goods trains. There has also been a reduction in fuel charges, due to the shift from diesel to electric traction, which has contributed in improving the Operating Ratio.

Bhakar stated that with energetic guidance and leadership at national and zonal levels and initiatives and personal monitoring by A.K. Gupta – General Manager of WR, several projects and works on WR have received good momentum. The 307 km long project, linking Udhna in Surat district of Gujarat to Jalgaon district in North Maharashtra, has provided a fillip to growth in areas falling under this rail section which has 44 stations, 380 bridges, 31 foot over bridges, 101 platforms. Passenger amenities like platform shelters, toilets, waiting rooms were also provided.

The opening of electrified double line between Udhana and Jalgaon has resulted in adding a new chapter in the series of accomplishments, thereby contributing to the basic infrastructure of Western Railway. Electrification of this section is in line with Indian Railways motive for uni-traction system. It is also a step towards Green initiative, as it is eco-friendly and less hazardous to environment.