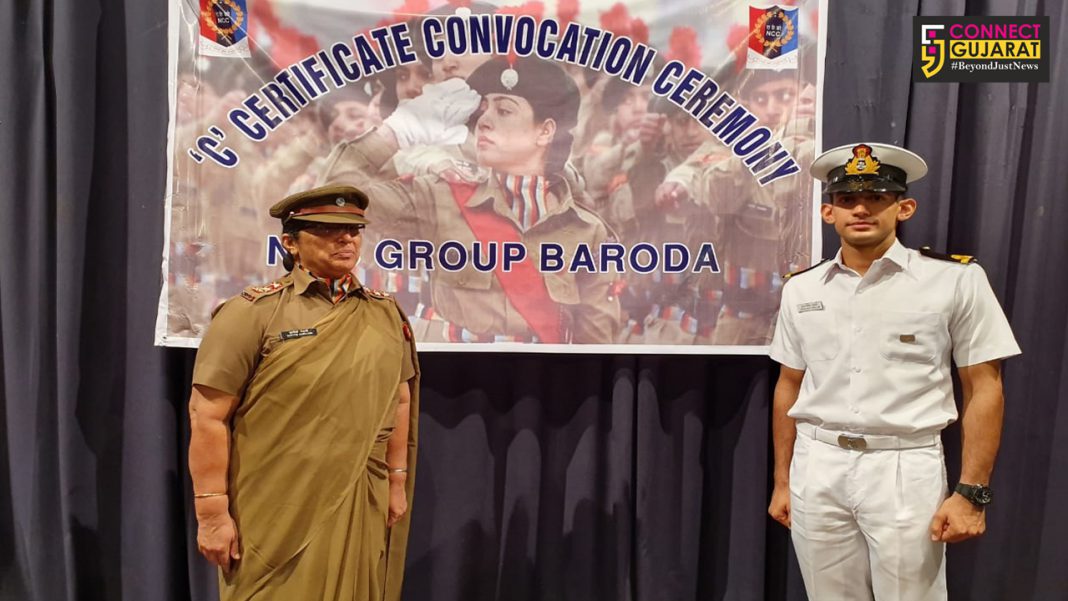 “Gujarat has the patriotism and have always stood in support of the country but reluctant to join the armed forces. I requested the cadets to inspire others to join the forces specially from Gujarat and serve the country,” said Major General Roy Joseph Additional Director General NCC Gujarat, Dadra and Nagar Haveli, Daman and Diu. He was in Vadodara to handover the ‘C’ certificates to the cadets in NCC Annual convocation and award ceremony.

Roy Congratulated all the cadets for completing the three years of rigorous training and are now on the path for becoming good citizens and serve the country. He asked the cadets to become role models for other cadets and inspire others to join the armed forces.

“After joining here as ADG I saw the patriotism in the youths of Gujarat but when it comes to join the armed forces the numbers are much less in comparison to the other states. I urge all the parents to inspire their children to join the armed forces and lead from the front. The motto of NCC is Unity and discipline and the cadet must act as ambassadors to spread values in the society and become role models for others,” said Roy Joseph.

He gave various mantras to the cadets to follow in their lives to become good citizens. The passion in life, do the work you love, hard work and no shortcuts in life, push and try yourself to achieve the goals, persistence and above all serve the country. He also requested the cadets to follow the Twitter handle of NCC to know the happenings in Gujarat and also refer the website which is in process and will be active in short time.

Total 578 cadets of NCC group are felicitated after three years of sustained training in the convocation ceremony by Major General Roy Joseph Additional Director General NCC Gujarat, Dadra and Nagar Haveli, Daman and Diu. Other officials of NCC Vadodara also remained present at the ceremony and congratulated the cadets.

The ceremony was also attended by Sub Lieutenant Karan Dilip Chelani who joined the Navy after getting the ‘A’ certificate from the NCC. His motto in life is to serve the country. He idolises his mother for the inspiration to join the armed forces.

“Its a special feeling everyday after you wear the uniform in the morning. Since childhood I saw my mother in the uniform and always wanted to join the armed forces. After getting my NCC certificate I joined the Navy on INS Shivangi at Mumbai. I urge all the youth specially from Gujarat to join the armed forces as no other job gives you the chance to serve the country and society,” said Karan. His mother Captain Savitri Chelani is a Professor in MSU and instructor in the NCC.