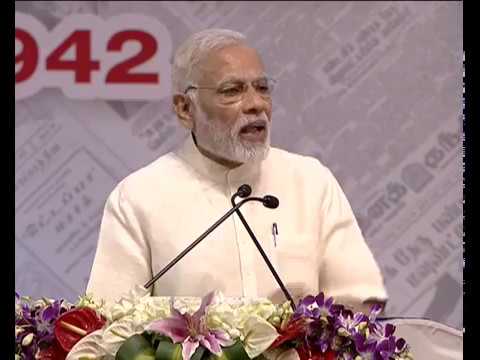 Media has the power to transform society and therefore it has as much social accountability as the elected government or judiciary, Prime Minister Narendra Modi said here on Monday.

Speaking on the occasion of the platinum jubilee celebrations of Tamil daily 'Thanthi', Modi stressed that editorial freedom must be used wisely in public interest and that the freedom to write does not mean "freedom to be factually incorrect".

Quoting Mahatma Gandhi, the Prime Minister said that press is "definitely a power, but to misuse that power is criminal".

"Today, newspapers do not just give news. They can also mould our thinking and open a window to the world. In a broader context, media is a means of transforming society. That is why we refer to the media as the fourth pillar of democracy," Modi said.

"Even though media platforms may be owned by private individuals, they serve a public purpose. As scholars say, it (media) is an instrument to produce reform through peace, rather than by force. Hence, it has as much social accountability as the elected government or the judiciary," he added.

"Today, every citizen analyses and attempts to verify the news that comes to him through multiple sources. Media, therefore, must make an extra effort to maintain credibility. Healthy competition among credible media platforms is also good for the health of our democracy," the Prime Minister observed.

He said that a lot of the media discourse these days revolves around politics but India is more than just politicians.

"It is the 125 crore Indians which make India what it is. I would be happy to see media focus a lot more, on their stories, and their achievements," Modi said.