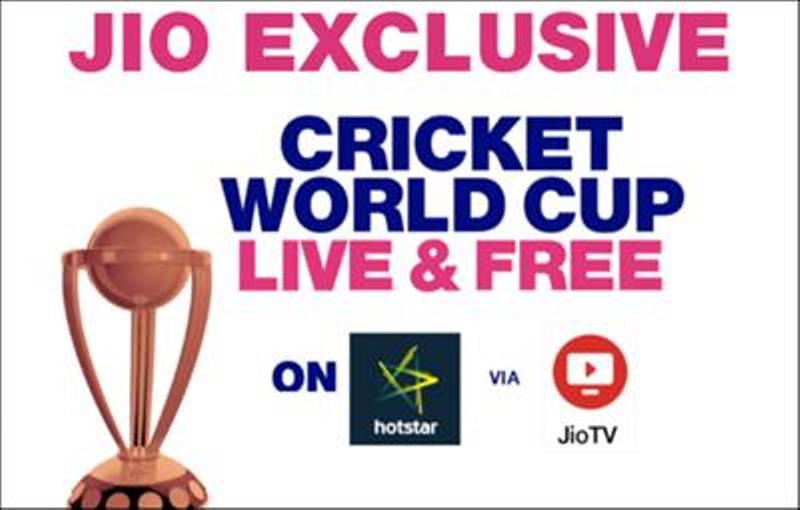 USERS CAN WATCH EVERY MATCH OF THE WORLD CUP LIVE & FREE

As the biggest cricket extravaganza is just started, Jio comes up with its own surprise for the users. The platform provided it’s users free access to live matches on go. The customers can watch every World cup match free and also play along at My Jio app and win prizes.

Jio also continues to bring excitement through a new version of its game JioCricket Play Along which promises to engage its users during the world cup, but also provide all necessary information like scores, match schedules, results and lots more, all under one roof. Jio users will also have the option of recharging with Rs 251 cricket season data pack, so that they never run out of data while watching the LIVE cricket broadcast on Hotstar via JioTV.

Jio Cricket Season special data pack is available to all Jio users for Rs. 251 which is a special pass for all cricket enthusiasts and is created to cater to their high data consumption during such seasons. The pack provides 102 GB High Speed Data for 51 days, which would be adequate for watching all the world cup matches. With this, cricket lovers can seamlessly stream all their favourite matches, free on Hotstar via JioTV, without interruption and any worry of exhausting their daily quota of high-speed data.

The interactivity ensures that viewers can not only watch their favourite cricket contest but also be a part of the same by predicting the outcome of the live match in real-time. The game is available to both Jio and Non-Jio subscribers where users can download MyJio application to play the game. Players can test their knowledge of cricket while predicting real-time outcomes and accumulate points for every correct prediction.