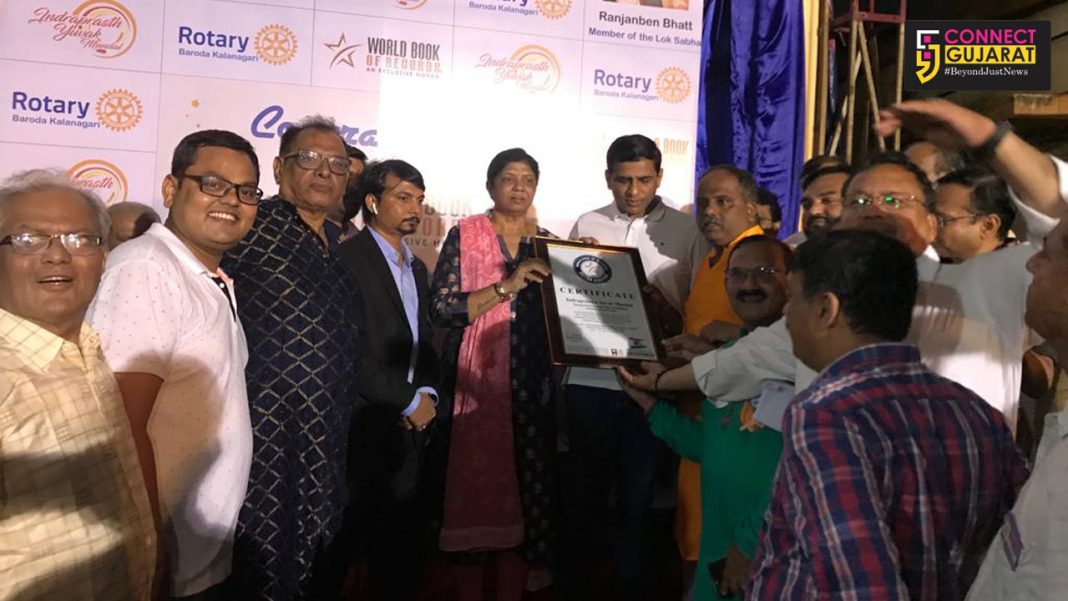 Indraprasth Yuval Mandal in Ellora-Park Vadodara achieved a milestone on Thursday after they registered their name in the record books. The mandal completed 678 eco friendly Ganpati visarjan in their artificial pond.

Indraprasth Yuvak Mandal this time import artificial pond for immersion of clay idols in an effort to save the environment. The 3.50 lakh cost pond is used to immerse the Ganesha idols made from clay and later the water will be filtered and stored in the water harvesting well of the society. The effort is to save the water animals lives inside the ponds from getting affected during the immersion.

The folding pond is cost around 3.50lakhs and is the size of 40/18 and carries 60,000 litres of water. Idols from one foot to four foot was immersed inside the pond spreacially the clay ones. The mandal completed the record in the evening after immersed 678 idols inside the pond.

The mandal has been granted the prestigious award of WORLD BOOK OF RECORDS, 2019 from the hands of Ranjanben Bhatt, Member of Parliament,for 678 of eco-friendly Ganpati Visarjan. They also thanked councilor Thanks Rajeshbhai Ayre for his great support to achieve the feat.

Mandal president Tarang Shah thanked the people of the city for the support and dedicated the award to the Lord Ganesha and the citizens. He said they tried to show a eco friendly way of immersion to the people and allow the clay idols to immerse inside the artificial pond. They also allow the other mandals and people to immerse their idols and provide the Pooja items and free vehicle support from their place to the pond.

Tarang said, the aim is to save the water animals from getting affected by the immersion as many pandals still continue to install POP idols and that is dangerous. The mandal plans to filter the water and store it inside the water harvesting tank and the clay will be used in the gardens.