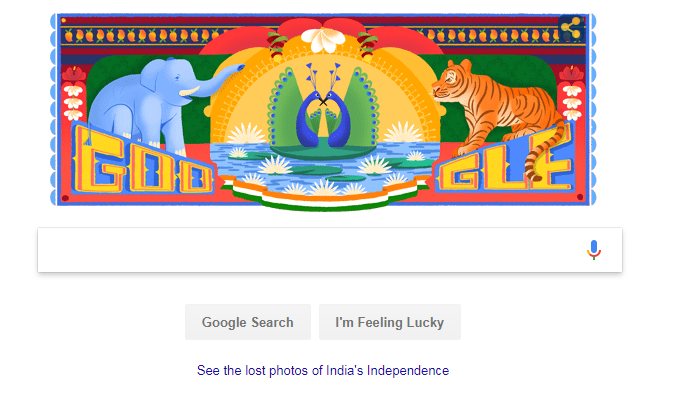 Google on Wednesday celebrated India's 72nd Independence Day with a colourful truck art doodle, featuring images of some of the country's most iconic plants and animals.

"A long-standing tradition in this four million square kilometre nation where truckers who live on the road surround themselves with cheerful folk art to occupy their minds during long months away from their families," reads the Doodle page.

The doodle features the national bird peacock at the centre, flanked on both sides by a Bengal tiger and an elephant.

Other elements in the doodle comprise India's national flower lotus and national fruit mango with the sun rising in the backdrop and colourful flowers and the Tricolour at the bottom.

"Thousands of kites dot the skies over India as the country celebrates its 72nd Independence Day. Both a solemn and joyful occasion, this marks the day in 1947 when India became an independent, autonomous state, fulfilling the dream of leaders like Mahatma Gandhi and Jawaharlal Nehru," the page reads.

The doodles on Google's main page are temporary logos to commemorate holidays, events, achievements and people.