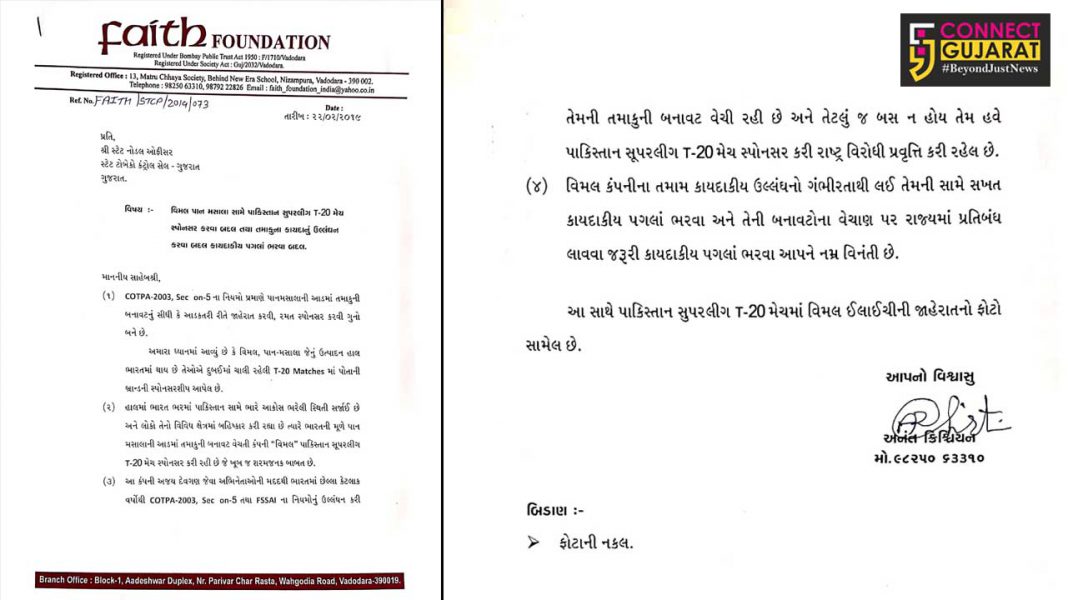 Faith foundation in Vadodara raised strong objections against the manufacturers of Vimal Pan Masala for advertisement in ongoing T20 league in Pakistan. They also approached the State Nodal officer Tobacco Control Cell Gujarat to intervene and take strict action against the company.

After the cowardly terror attack on the CRPF jawans in Pulwama the whole nation is demanding strict action from the government. Proposals are made to ban and cut down the supply of goods and other essential things to Pakistan. The Indian companies also withdraw their advertisements from there in view of the solidarity towards fight terrorism.

However Faith foundation raised serious accusations against the Indian company Vimal Pan Masala for continuing their advertisement in the ongoing T20 league in Pakistan. In a letter to the state Nodal officer Tobacco Control Cell they asked for his intervention in the matter as per the law and in larger interest of the nation.

“As per COTPA 2003 Section on 5 to advertise the tobacco products directly or indirectly and sponsored a game in the name of Pan Masala is a offence.  We came to know about Indian Vimal Pan Masala company sponsor T20 matches in Pakistan which is shameful in larger interest of the nation. In view of the present scenario the company is hurting the sentiments of the people by sponsoring the league. The company also violates the COTPA and FSSAI rules for years with the help of actors like Ajay Devgan continuosly advertise the products. We request you to take strict steps against the company and put a ban on to sell their products in the state. We also demand that Vimal must withdraw its sponsorship from the T20 league in Pakistan,” said Anant Christian founder trustee of Faith foundation.

Faith foundation is also in the process to send a letter to filmstar Ajay Devgan to stop advertise for the Vimal Pan Masala company.