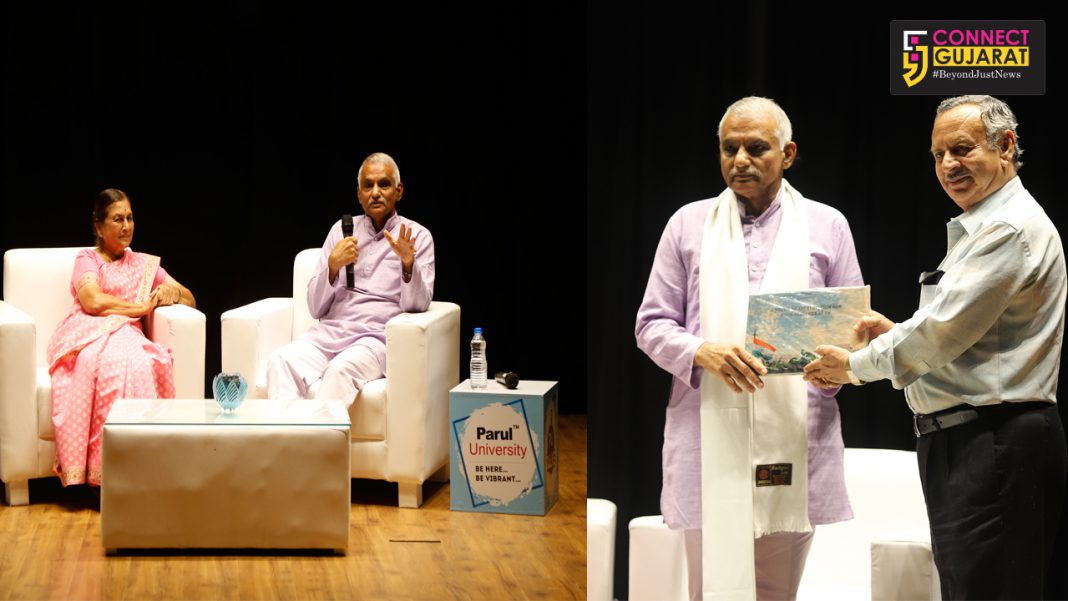 Padma Shri awardee Prakash Amte and his wife Dr. Mandakini Amte visited Parul University as guest speakers at PU Talks a platform which acts as the bridge between youth and success. The event witnessed how the couple through their compassion, love and altruism helped the marginalised community of Madia Gond and established a social project named Lok Biradari Prakalp.

This project comprises of a hospital, school, vocational skills training and animal orphanage which was incepted in the year 1973. In a world where the people are struck with the madness of avaricious motives, the physician couple bestowed the nation by being healers of mankind. Prakash Amte is a general surgeon by profession and his wife is an anaesthesiologist.

Prakash recollected, “We started working in Bhamragarh forty years ago, right after our marriage. During the first few months, we had second thoughts on coming here, because the tribal people refrained from conversing with us. But we were determined, we started learning their language from the officials and eventually connected with them.”

Bhamragarh was a highly backward region of eastern Maharashtra when the duo planned to devote their lives for the enhancement of its inhabitants. During the time of labour, if there occurred any complications in infant delivery, the new born was a subject to mutilation. Upon encountering these disturbing situations, the couple acquired the knowledge of gynaecology, brought instruments and started practicing it in their hospital.

Currently, the hospital serves nearly forty thousand patients annually. More than five hundred students and teachers attended the event, who were highly motivated by the prodigious work of the Amte couple. Amidst this Mandakini Amte shared, “The tribal group didn’t trust us initially. In order to provide them our services, we slowly started adapting to them and tamed their uncivilized attributes. They stopped their blind faiths and started consulting us for medical issues. We slowly taught them farming and shortly established a school which has six fifty students enrolled as of now.”

Towards the end of the talk session, the guest speakers enlightened the students by generously answering their curious questions and ignited their minds. “We feel honoured to have hosted such powerful personalities. Their presence will go a long way in inspiring the University’s medical and social work students. I believe the students will rightfully undertake their social responsibilities and follow a moral code”, said Dr. Devanshu Patel, President of Parul university.