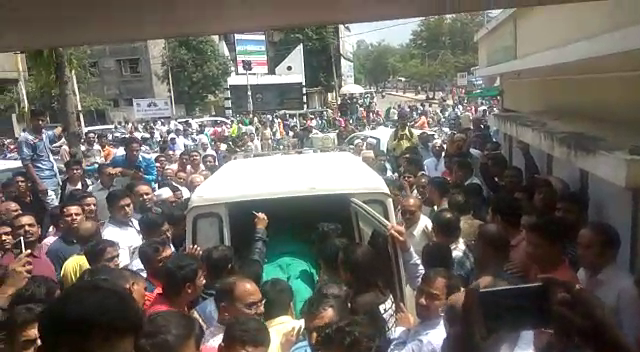 Broker dealing in Dal and cereals fired four rounds of bullets on the owner of Arihant Dal mill owner in Dahod on Saturday. The injured businessman was first reffered to dahod and then rushed to private hospital in Vadodara for treatment. The incident shocked the locals after the broad daylight firing on the businessman.

As per the details Prasannchand Jain runs Arihant Dal mill in Dahod and was sitting in his office as per his daily routine on Saturday. Meanwhile one broker named Bhupendra Dalal dealing in Dal and other cereals enter inside his office and fired four rounds on him.

Two bullets hit Jain on his leg, one on hand and one on stomach and he fell down on the floor bleeding heavily. The security personnel and the accountant rushed to the spot after heard the bullet sound and shocked to see Jain in this condition. He was immediately rushed to the nearby private in Dahod for treatment.

The family and relatives of the mill owner also rushed to the hospital after the news spread like wildfire in the area. He was then shifted to a private hospital in Jetalpur area in Vadodara where the doctors attend him immediately and considered his health to be serious.

As per details the security guard tried to stop Dalal but he pushed him and entered inside the office and fire four rounds on Jain. Dahod police registered the case and hunt is on to arrest the accused. The range police also give the green corridor facility to the injured mill owner to reach hospital in Vadodara.