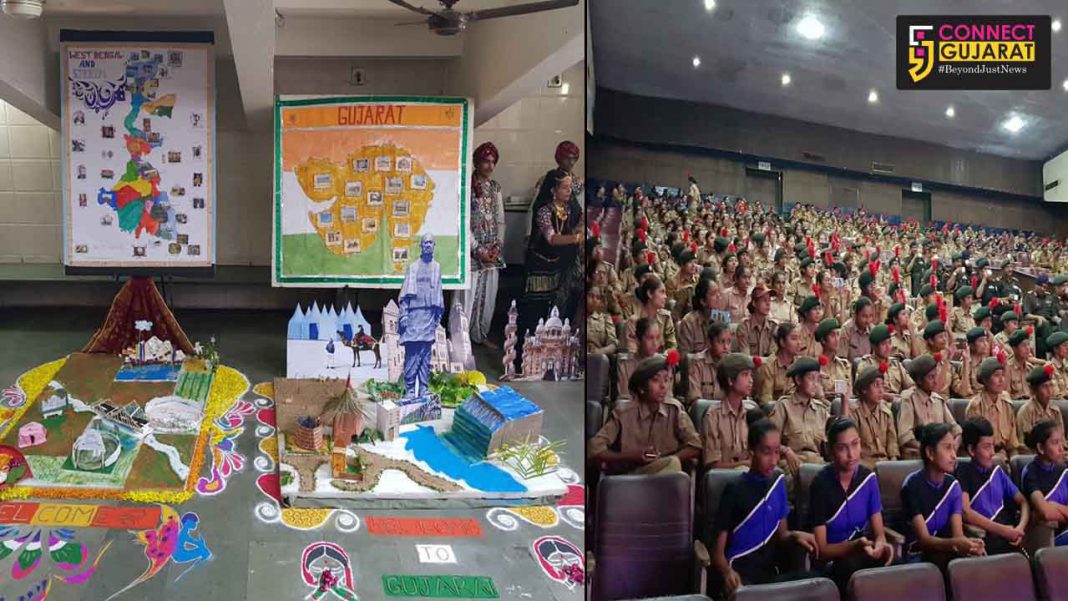 Under the patronage of Major General Roy Joseph, ADG, NCC Directorate Gujarat, Dadra Nagar Haveli, Diu and Daman, Ahmedabad, Ek Bharat Shreshtha Bharat Camp was organized from 01 Aug to 12 Aug 2019 at NCC Campus, Law Garden, Ahmedabad which culminated with great experience gained by the participant cadets. The camp was attended by 400 NCC cadets of Gujarat and 100 Cadets of West Bengal and Sikkim State. The aim of the camp was to foster the spirit of National Integration and showcase the diverse culture, religion, heritage, customs and traditions of two states.

During the camp the cadets showcased their respective States by the way of “National Integration and Awareness Presentations” and regional songs and folk dances. The cadets exchanged ideas by the means of a debate and public speaking. NCC cadets from West Bengal and Sikkim were also amazed to see the progress made by Gujarat state, when they were taken on two days tour to all the places of Historical, Educational and Tourist interest in and around Ahmedabad and Gandhinagar.

As part of the social awareness programme the cadets were given talks on the aspects of Digital India, Disaster management, Harmful effects of Drugs and Women Empowerment by the dignitaries of various department of the state. The cadets also carried out the awareness drive for “Swatch Bharat Mission”. A team from Exchange Participants Association (EXPA) also trained the cadets on personality enhancement.

The camp concluded with the closing ceremony which was graced by Maj Gen Roy Joseph who later gave away the prizes to the cadets performed well during the camp. He conveyed deep appreciation to Brig RK Singh for fostering the spirit of “National Integration” amongst 500 NCC cadets, who have now become the brand ambassador of Gujarat in state of the West Bengal and Sikkim.