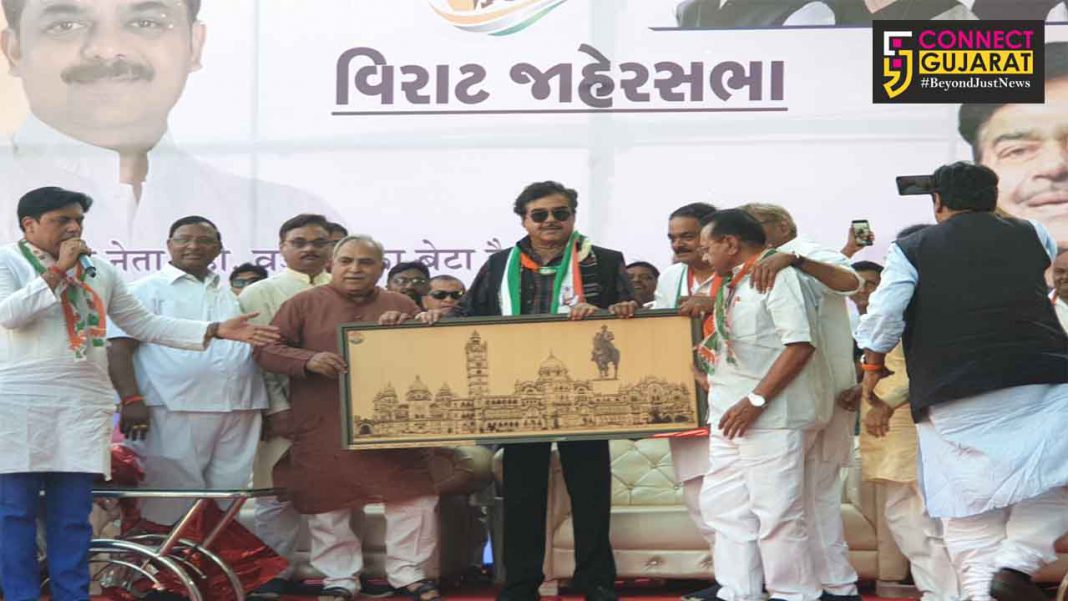 Congress leader Shatrughan Sinha said in 2014 it’s was Modi impact but now it’s havoc as he failed to keep their promises made to the voters. The people will teach lesson to them as it’s the fight between what is right and justified.

The star campaigner of the party is in Vadodara for a public meeting received warm welcome on stage. He felt nostalgic as the city had a long connection with him. Shatrughan Sinha appreciated the energy in Vadodara and said it’s the sign of change. He addressed the Congress candidate as the bridegroom for today and appealed the people to vote for change.

“I am the Bihari Babu of the city and had a very old relationship with Baroda. Years ago I was here for the shooting of ‘Bhai Ho To Aisa’ and since then it’s once a friend always a friend like relation with Vadodara. I visited here many times for political and social programmes and Vadodara always has a special place in my heart,” said Sinha.

He said to be part of the BJP since long and groomed by Bharat Ratna Nanaji Deshmukh, Atal Bihari Vajpayee and L.K. Advani. With his hard work he became full fledged minister in the cabinet and worked tirelessly. He attacked PM Narendra Modi for not keeping the promises and taking wrong decisions after came into centre.

“From giving international airport and AIIMS to Vadodara the PM Narendra Modi fails to keep it’s promises towards the people of the city. This time there is no Modi effect in the country and people will decide the their fate and teach them a lesson,” said Sinha.

He said present Congress party president Rahul Gandhi gained maturity during the reign of former PM Manmohan Singh and with his efforts and dynamic team won in Chattisgarh, MP and Rajasthan. He said
BJP is now a party in the hands of industrialists and arrogance is clearly visible in them. He attacked the BJP for
Demonetisation as a wrong decision and forced people to commit suicide. He
raised the voice against the decision along with other top leaders and terms it as organised loot.

Attacking the BJP further he said the demonetisation was not the decision by the party not the goverment as no top leaders was aware about it. He said as people are slowly trying to get up after the effects of demonetisation the government implement
complicated GST which hit the people and economy more.

He said to be the leader by the people and always raised voice for them. On Rafael deal he asked the BJP to answer the whole things and good to be come in open without being ashamed of it. He believed honesty and transparency in political and personal life is necessary and the BJP is diverting the issues from the issues of employment, rising prices, women security and many others.

About his decision to join Congress he said
many parties called him after he left the BJP. He said his only aim is about betterment of nation and bring new people, new PM at the centre and dream of new India. After all the thinking he decided to join the grand old party and overwhelmed with the welcome he received everywhere.

He said under BJP rule the Dhan Shakti overpowered Jan Shakti and Media Shakti and now it’s the people of Vadodara to decide the fate and gives them a befitting reply.