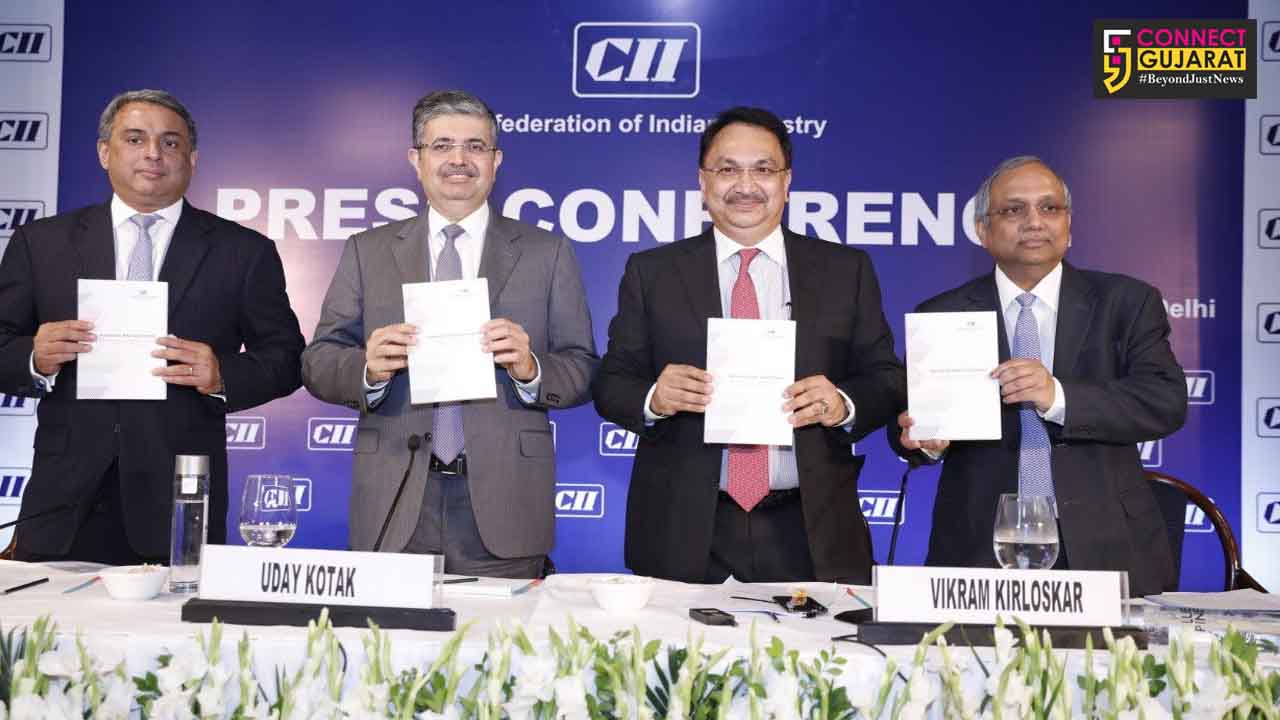 “This is the right time for India to think big and envision GDP growth rate of 10% to greatly improve development outcomes. With a landslide electoral victory and new Council of Ministers in place, we expect the Government to engage strongly with industry to ideate and implement impactful policy solutions for double-digit growth,” stressed Mr Kirloskar.

He added, “Given recent data releases, CII is according high attention to four key issues of energizing growth, generating new jobs, deepening India’s overseas footprint, and energy security. CII is focussing on strengthening Indian industry’s role in policy solutions as well as targeted action initiatives under the theme of Competitiveness of India Inc: India@75 – Forging Ahead.”

“As the Government has greatly improved ease of doing business, it must now focus on significantly slashing the cost of doing business. Mega connectivity and storage projects are required across the country for lowering logistics costs which render Indian goods uncompetitive,” he stated. The required policy actions include cutting interest rates, rationalising taxes on equity capital, addressing delayed payments from the public sector, and improving logistics.

CII has submitted policy inputs to the Government for the upcoming Budget which include measures such as cutting corporate income taxes to 25% for all companies and progressively lowering the rate further to 18% without exemptions. It has also called for removing Minimum Alternate Tax and cutting Dividend Distribution Tax in its pre-Budget submissions.

The CII President requested the Government to maintain high public outlay on infrastructure such as electricity, roads and highways, telecommunication and other transport as the next growth driver. CII estimates that $1 trillion is required for infrastructure in the next 5 years.

The CII President suggested triple-pronged approach for job creation, relating to employment intensive sectors, skilling, and labour reforms for enterprise creation. He placed strong emphasis on accelerating growth in job creating sectors such as construction, hospitality, logistics, healthcare, and the financial sector, among others. According to CII, construction and healthcare alone can create 20 million jobs in the next 5 years.

CII has a strong agenda for skilling and connecting youth to jobs through Multi-skill Centers, apprenticeship initiatives, and Model Career Centers, among other programs. These efforts reach out to 1 million youth each year and CII plans to multiply this to impact 10 million youth.

As global trade dynamics are rapidly transforming and global value chains are shifting, India has the opportunity to capture a larger share of the world goods and services market. Boosting net exports and enhancing overseas investments is an imperative for the nation at the current juncture. India should target merchandise exports of $400 billion for 2019-20 from $331 billion now, stated Mr Kirloskar.

“We need to find alternative schemes compatible with WTO to support exporters. While there has been considerable improvement in overall ease of doing business, trade facilitation must ensure seamless connectivity to external markets. Trade financing too needs immediate attention of the Government as only 1% of total commercial banks’ lending goes towards trade financing,” said the CII President.

On free trade agreements, Mr Kirloskar noted that a better strategy should be in place to leverage their benefits as these have not resulted in significant export outcomes. He suggested fast-tracking FTA negotiations with the EU. The new trade policy should support FDI for better integration into global value chains.

CII has shared a compendium on trade facilitation with the Government and would continue to work on the 12 champion service sectors. It has also launched a comprehensive study on FTAs to articulate the country’s offensive and defensive FTA interests.

Sustainable mobility is key to addressing climate change, where India has taken a global lead. “It is important for the Government to lay down a roadmap for transition towards electrification of the transport system while ensuring continuity and certainty of FAME 2 and providing freedom to industry to ensure this change. In addition, Government policy needs to be technology agnostic towards all green technologies,” stressed Mr Kirloskar.

CII’s policy recommendations for reducing carbon emissions and oil dependency in the transport sector include a supportive green technology policy, developing infrastructure for electric vehicles such as charging and batteries, and integrating e-mobility with renewable energy.

The Indian economy has been growing at an average annual growth rate of 7.5% during the last five years and is expected to continue to be the fastest growing major economy in the world. However, to pull the 27 crore Indians (World Bank, 2012 data) from below the poverty line and to generate 70-80 lakh jobs a year to gainfully employ its youth, the economy needs to grow at a sustained 8-10% per annum.

CII believes that the twin priorities of high growth rate and livelihood and job creation, can be achieved by enhancing the competitiveness of the Indian economy and Indian industry through a stronger push to reforms both structural and sectoral.

The first 100 days of the new Government would be an opportunity to set the direction and pace of the reform agenda for the country over the next 5 years. Some of the key recommendations of CII for the New Government are as follows:

Use a composite index which captures both the fiscal deficit and the quality of the budget to track fiscal performance. Single ratio of fiscal deficit to GDP only captures the quantum of expenditure.

Announce a comprehensive National Employment Policy as suggested by NITI Aayog, in consultation with industry.

Expedite the proposed National Tourism Policy to create an overarching national framework for facilitating growth of tourism sector across the country. The framework should address issues of strategy, tourism infrastructure and connectivity.

Finalise the National E-Commerce Policy Framework in consultation with industry.

Expedite the New Industrial Policy for investments in the manufacturing sector

Lower corporate tax rate to 25% for enterprises of all sizes. Gradually, reduce it further to 18%.

Expedite the announcement of the new direct tax legislation.

Extend investment allowance to all capital investments across sectors.

Move towards recasting GST to three rates. ‘Standard’ or items of mass consumption should converge into a single rate between 12% and 18%; ‘demerit’ goods should fall in the highest tax category i.e. 28%; while ‘merit’ goods including items used by the poor to be shifted to 5% or the nil slab.

Finalise the model FPO framework being drafted by Ministry of Agriculture and Farmers’ Welfare, in consultation with stakeholders, to help farmers benefit from aggregation, by improving access to investment, technology, input, market and managerial capabilities.

Instruct all Central Ministries to clear the pending dues of MSMEs, till date, within a stipulated time.