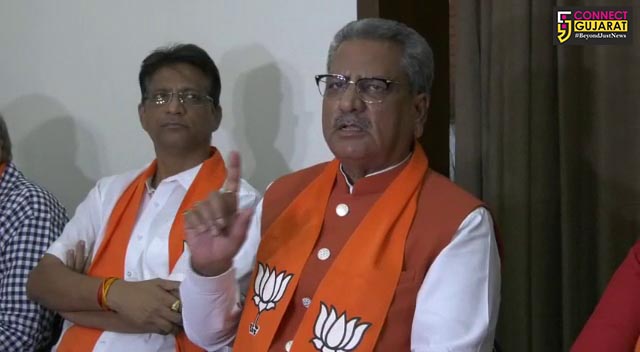 Gujarat BJP incharge Om Prakash Mathur said party will win in all seats of Gujarat and happy to see the voting on the first phase of elections in the country. Attacking the opposition he says Congress is falling from its standards and people are leaving the party for better options.

Om Mathur was in Vadodara for a party meeting in view of the upcoming elections. He said there is a positive sign in Gujarat and BJP will win in all 26 seats. Attacking Congress he said the party don’t have any agenda against them in the elections and falling down from their standards. People are leaving the party for better options. He said BJP is taking their agenda of development before the people and get their support.

Speaking further he said BJP is the only party to think about the farmers in the country promise to give high returns for their crops.

Speaking on the comments by Waghodia MLA Madhu Srivastav he said everyone be it from BJP or other party, they shall control and carefully choose their words to speak before public. Finally he appealed to the people to vote without fail after showed his happiness with the voting on the first phase of elections in India.