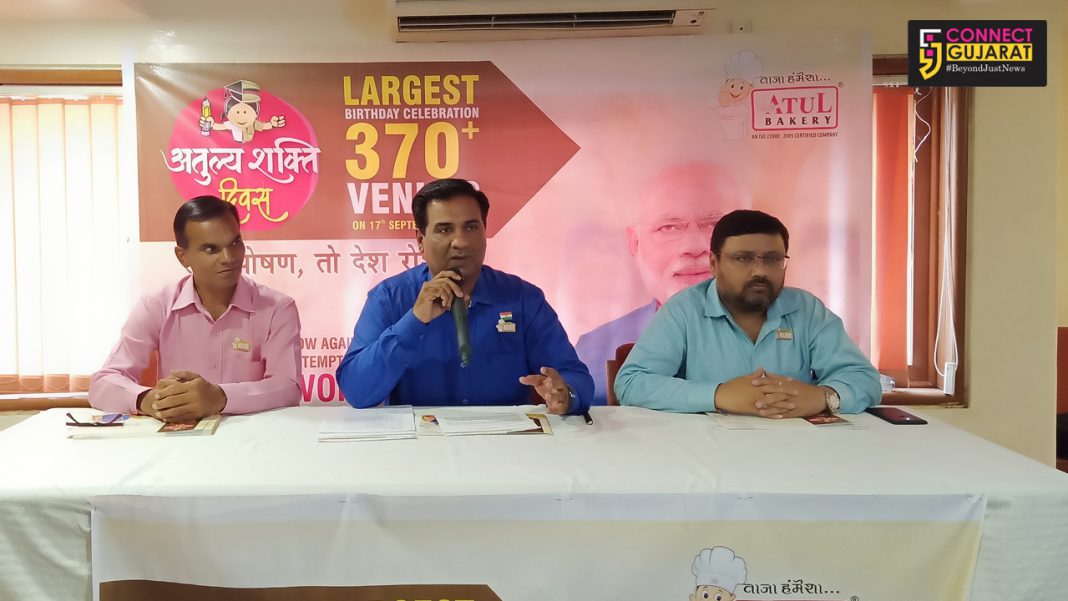 Atul Bakery is going to celebrate the birthday of Prime Minister Narendra Modi in a unique way. They are celebrating at 370 plus venues with over 10000 participants all on the same day. The organisers are also attempting eight world records during the celebrations.

The theme of the celebrations are PM Modi vision of war against Malnutrition and revoking of article 370 from Jammu and Kashmir. The Atulya Shakti Diwas will be the largest birthday celebration at 370 plus venues on 17th September 2019.

“We will celebrate Atulya Shakti Diwas with largest birthday celebration at multiple venues. The purpose of the event is to support the dream of our Prime Minister for malnutrition-free India and want to contribute in making this dream come true. There can be no better gift we all can give to our PM Narendra Modi other than celebrating his birthday at Tribal and Rural Areas with more than 10,000 plus Kids at 370 Places to make his dream successful,” said Atul Vekaria director Atul Bakery.

He further added that the celebration on same day is going to be amazing and a one step for their nutritious growth and giving non-Stop joy and happiness to children. On the day nutritious food packets will be distributed to the kids of Ashramshalas, Aanganwadis and Tribal areas to take a step forward to fight Malnutrition. Banners of Swachh Bharat and Fit India are also going to install at places to aware people.

On 17 SEPTEMBER 2016 they created world record for Massive 3750 kg. Cake, 6.6 it in Height, labeled as World’s Tallest Pyramid Cake. The cake was cut by Tribal Disabled Girls (Divyang) with amazing events at Maniba Party Plot, Surat. This great achievement by Atul Bakery, was further starred by entry into. The Guinness Book of World Records.

In 2017 the Second celebration of Atulya Shakti Divas, was held on 17 September, 2017 with a motto of encouraging autistic children, who cut a huge 68 ft. cake weigh  680 kg. at Swarnabhumi party plot in Surat. The event was attended by more than 10000 people, with a live performance by Kailash Kher, one of the renowned singers of the Bollywood industry.

In 2018 the 3rd celebration of Atulya Shakti Divas, every Indian, born on 17th Sept, has been invited to be a part of this Grand Celebration. There was be more than 1001 Indians, Celebrating their birthday, with a Cake Cutting Ceremony, together at Surat, as a mark of respect to Narendra Modi. with an footfall of more than 10000 People. With this event Atul Bakery recreating the History by re-entering the Guinness Book 01 World Record.