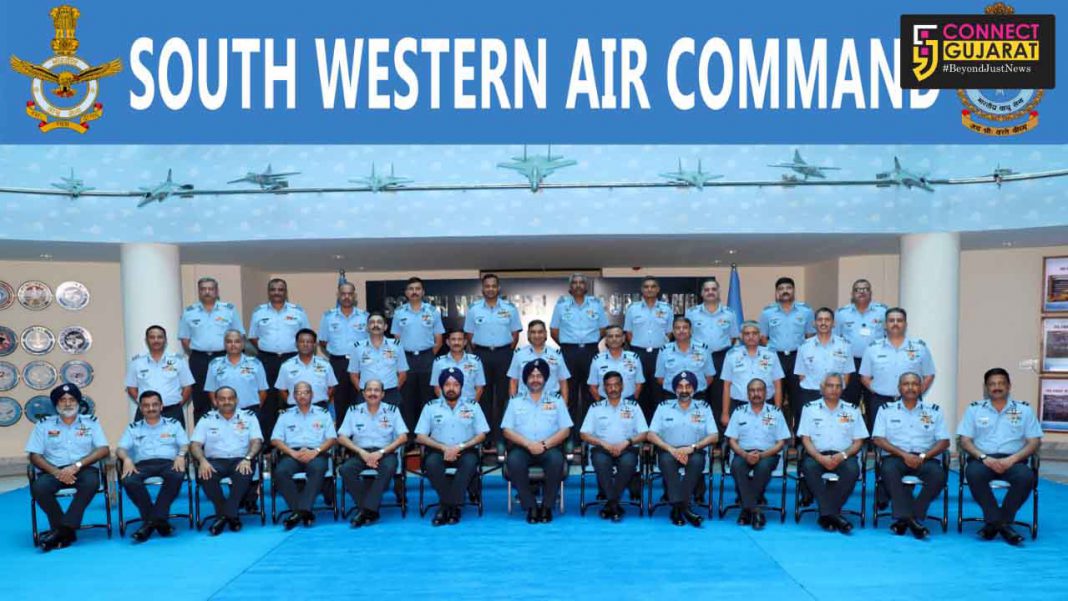 In his address, the Chief of the Air Staff acknowledged the high degree of professionalism and hard work displayed by the air warriors of SWAC in achieving the assigned goals and especially appreciated the professional manner in which HQ SWAC had planned and executed Ex Vayu Shakti 2019 showcasing the IAF might and firepower capability.  He also appreciated the high level of operational preparedness maintained by the units under this command. In view of recent intelligence inputs of a possible infiltration attempt in Kutch sector, the Chief of the Air Staff highlighted the need for increased vigil and enhanced level of Base Security preparedness by SWAC units.

He highlighted path embarked upon by the IAF to make good critical deficiencies in spares and weaponry as well major upgradations planned in the inventory to strengthen IAF’s operational capabilities. He emphasized the need for air warriors to keep abreast with the latest tactics and technologies and to focus on the associated challenges.

In recognition of excellence in performance in various fields the CAS awarded trophies to the Commanders of various Stations and emphasised the need for recoginising professional pride and excellence amongst air warriors. He appreciated efforts put in by
HQ SWAC in fostering jointmanship with sister services and evolving joint plans. The CAS also inaugurated new Conference Hall, aptly named after the only Marshal of the Indian Air Force Arjan Singh Distinguished Flying Cross, to commemorate his Birth Centenary celebrations.

Kamalpreet Dhanoa reviewed the progress of numerous welfare ventures for the families of air warriors being run under the aegis of AFWWA. She appreciated the efforts of AFWWA (Regional) and AFWWA (Locals) towards development of Sanginis through vocational training, welfare activities, medical camps and awareness programmes. She appreciated efforts of SWAC AFWWA (Regional) in extending helping hand to neighbouring villages of the Stations during recent flood like situation besides its contributions towards ‘Swachh Bharat Abhiyan’ and ‘Go Green Campaign’.

She addressed the Sanginis and urged them to empower themselves by learning new vocational skills so as to contribute effectively towards growth of the society.  She also expressed satisfaction about the steps taken by association at regional and local levels for the welfare of families of air warriors and called upon members to continue to strive for excellence.