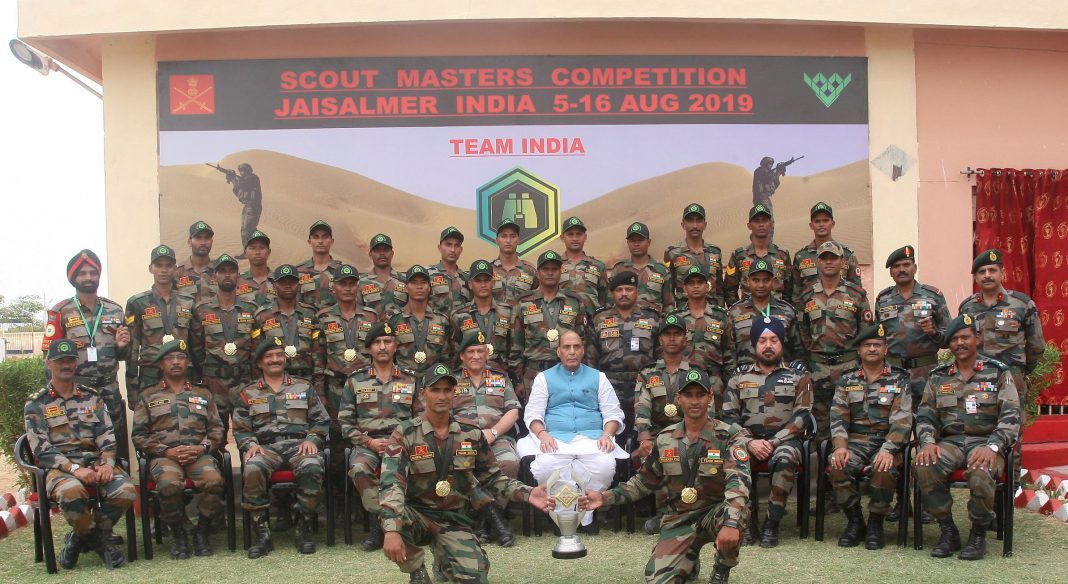 The Indian Army team has won the 5th Army International Scout Masters Competition held at Jaisalmer Military Station from in a fiercely fought competition with teams from Armenia, Belarus, China, Kazakhstan, Russia, Sudan and Uzbekistan. The Indian Army team was selected and trained under the aegis of Southern Command. The competition was organised from 06 August to 14 August 2019.

The Closing Ceremony was held in Jaisalmer on 16 August 2019 with Defence minister Rajnath Singh precided over as the Chief Guest. The ceremony was attended by General Bipin Rawat,  Chief of the Army Staff, Lieutenant General SK Saini, Southern Army Commander, delegations of participating countries, members of the International Organising Committee and several civilian and military dignitaries.

The Closing Ceremony commenced with a smart ceremonial marching of the participating contingents into the stadium. The Defence Minister Rajnath Singh addressed the participants and welcomed the representatives of the International Organising Committee, dignitaries and other guests.

Rajnath Singh lauded Southern Command for the flawless and successful conduct of the event. He appreciated the sportsman spirit, dedication and the professional standards displayed by all the teams in the competition. He also said that such competitions are an excellent platform to allow countries to build a constructive dialogue, strengthening friendship, partnership and trust.

He also mentioned that such joint military events would lead to interoperability and sharing of best practices thereby, benefiting all the participating nations.  At the end, the Fifth Army International Scout Masters Competition 2019 was declared closed by Rajnath Singh.

The prize distribution ceremony took place thereafter wherein the Defence Minister gave away the Champions Trophy to the winning Indian team, Runner’s Up Trophy to Uzbekistan and the Second Runner’s Up trophy to Russia. The Closing Ceremony culminated with a cultural programme to depict the rich cultural heritage of India.