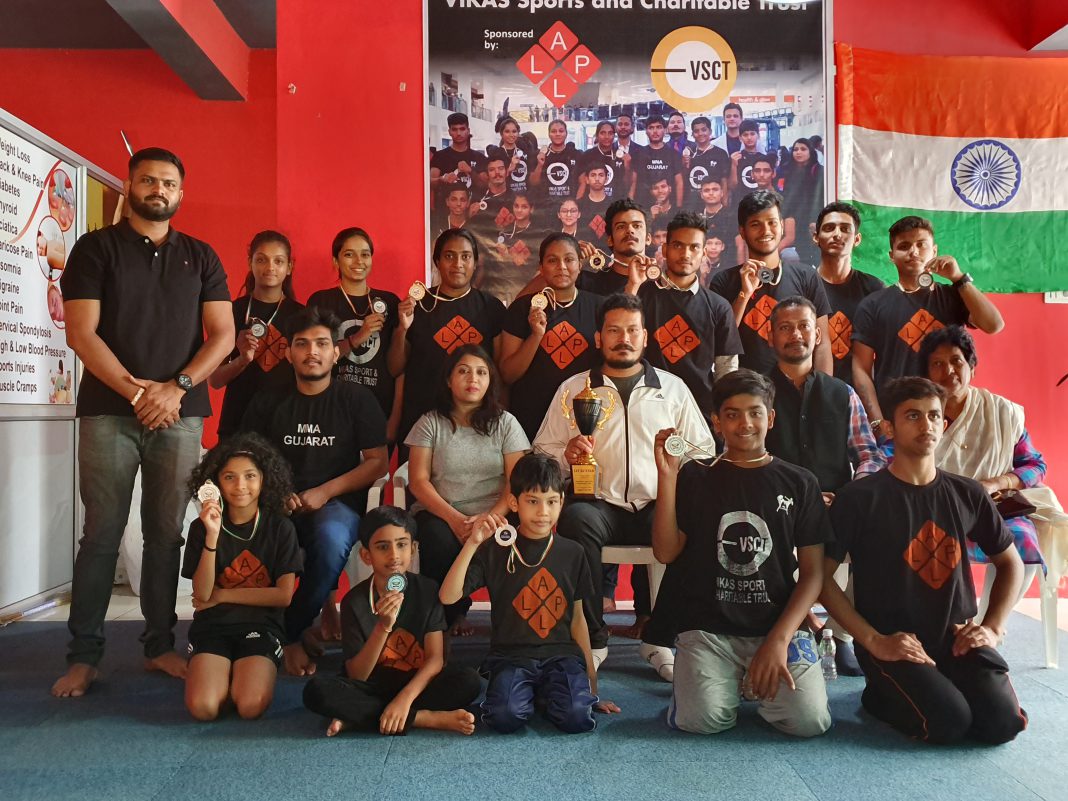 16 Mixed Marshal Arts students from Gujarat bring laurels to the state as they won 3 gold, 7 silver and six bronze in Bengaluru Open Nationals. With this effort Gujarat team moves to second place in national rankings from 28 previously. Three of the medalists which includes two girls will now represent India in the International tournament in Bahrain later in the year.

The team is the first ever participation from Gujarat as a group in the national championship and won medals to mark there presence among other players from different states. Coach and trainer Babloo Sawant also a Tai Chi Master has trained the students to achieve the milestone and bring laurels to the city and state.

“The sport needs lots of physical effort as it is a mix of everything and we at the Mix Marshal Arts Association of Gujarat train the students in a way to boost their confidence and win medals. Our aim is to help them move forward in their career as national and international medals not only bring them the success but also help them get top jobs based on their medals. Many of our students are in good positions and we continue to produce such players for the country,” said Sawant.

Vikas Sports and Charitable trust in association with Mix Martial Arts Association of Gujarat empowers the youth by providing them with apt coaching, mentoring and promoting them at various global platforms in sports and fitness domain. “Moving forward by merging hands with fit India initiative, we want to put India at the top of the global map at the Olympics. By establishing more than 100 world records in the near future and produce Olympians and prominent MMA to showcase the world importance of dedication, training, hard work and knowledge. Team VSCT has been working since 2010 for empowering health, wellness, medical facilities, education, sports and human development,” said Satyam Vichare Vice president Vikas sports and Charitable trust

Babloo Sawant is training students and they have break 18 world records mainly of Squats, Knee strikes, Pull-ups, in past 9 months and is still training students to achieve the target of 100 world records by the end of the year. With 50 percent of girls strength MMA Gujarat is working towards empowering them by giving them the platform and also open ways for their bright career.

In the recently held national tournament at Bangalore the MMA Gujarat team has secured 16 medals consists of 3 gold, silver and bronze. 20 fighters belonging to 5 different cities namely Vadodara, Ahmedabad, Karamsad, Anand and Rajkot of Gujarat had represented Gujarat state in Bengaluru Open Nationals. Now three of the medalists from Gujarat will join the Indian team to take part in international tournament at Bahrain.

About the future plans the association is planning to organise first Gujarat Open MMA fight national championship. Secondly five of the students will attempt a world record at Statue of Unity which will be telecast in 105 countries. The association need suport from the government and corporates to come forward and support the players financially and help the country to win and try to come in top 100 in rankings.