They go around having debates

Going door-to-door, being an active supporter.

They raise their voice towards the wrong,

Are helping the victims in need,

And initiating campaigns for good deeds.

They are the sidekicks of the politics, “THE YOUTH OF OUR NATION”. Having all the capabilities to become the heart of the Indian Political System, yet the ones behind the scenes.

Why is youth not the face of Indian Politics?

The competitiveness having no bars.

Requires a lot of money, honey!

And the list goes on, entrusting the youth with the most significant question,

IS POLITICS WORTH ALL THE DRAMA?

India has one of the highest populations of the young generations. They work hard for the elected candidate but often lack the sources and encouragement to be one on their own.  Their thoughts and ideas are eccentric which can be a stupendous impact on the nation’s upbringing but their ideas are often disregarded. If the youth becomes the brains in functioning of politics, their notions will relate to the rest 50% of the population, thereby balancing the different age groups and communities in unison.

However, when the time arrives we are content on being the aid and showcasing our opinions on the imprecise actions of the government but not ready to act for the improvement.

“Seeking the change is appreciable if you are willing to be the verve.” 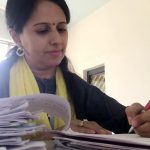