Youth who threw shoe at Rahul Gandhi sent to jail

Aries:Blood pressure patients should be extra careful about their health while travelling in a crowded bus. You...
Read more
0

The youth who threw a shoe at Congress Vice President Rahul Gandhi during his Kisan Yatra in neighbouring Sitapur district was sent to jail. 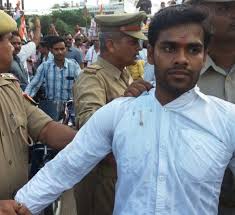 Hari Om Mishra will now be presented in the Chief Judicial Magistrate (CJM) Court on Wednesday.

Gandhi had claimed the shoe hurling incident was the handiwork of the Rashtriya Swayamsevak Sangh and the Bharatiya Janata Party though the assailant told police that he was miffed with Gandhi’s “lies”.

he told police during interrogation, soon after his arrest that Rahul Gandhi has been talking of loan waivers for the farmers and jobs to the unemployed while his party has ruled the country for the past 60 years … what happened during the Congress regime, they ruined the nation.

Mishra has done a journalism course but has no job and is said to be frustrated with his unemployment.

0
A big haul of foreign liquor heading towards Anand from Vadodara National Highway was caught by the District Local Crime Branch on...
Read more