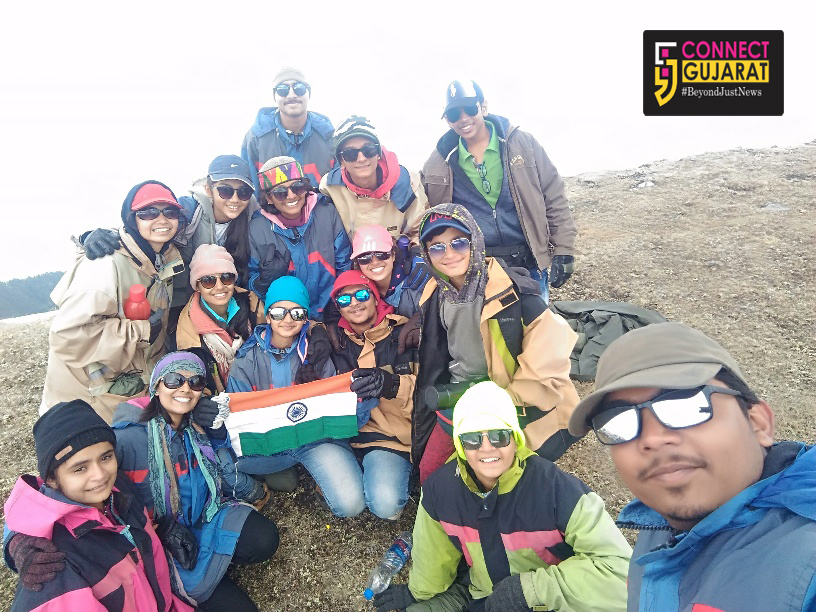 40 members of Eco Adventure Trail in Vadodara completed their tour of Sour Tal Lake Trek successfully this year after some of the members missed it in the last year trek.

The leader of the group Prachi Vaidya continues the family legacy and led the group to frozen mountain tarns. Leaving a bright defence career after completed the ‘C’ certificate in NCC she is going to move ahead with her passion of mountaineering.

The Vaidya Family in Vadodara are known as a mountaineering family with all the members are professional climbers. Father Sandip Vaidya is a well known mountaineer climbed about 14 mountains in his days. He trained many youths and children to become mountaineers. His wife Hema Vaidya is a qualified member of all the expeditions and played a critical role of a care taker and encouraged the young children climbers. She herself climbed many mountains and now accompany her daughters.

Daughters Prarthana Vaidya and Prachi Vaidya became professional climbers at a very young age. Younger one Prachi at the age of six climb Mt. Thelu (6002- 19000ft.) and also features in the Limca book of records for being the youngest member to climb Mt. Thelu. She also climbed other mountains successfully. The other daughter elder one Prarthana also had the record of the youngest mountaineer to climb Mt. Kalindi and also successfully climbed other mountains. The Gujarat government also awarded the family for their achievements in mountaineering on 25 July 2007.

Now the youngest daughter Prachi taking forward the family legacy and lead the expedition group successfully to trek Sour Tal Lake in a 12 days camp at Himachal Pradesh. The group consists of boys and girls in equal numbers trek the mountains in high altitudes.

“The group of 41 members of the age group of 12 to 40 years completed the trek successfully this year. The Sour Tal Lake Trek is tough as the mountains are steep which makes climbing difficult. But all the members trekked successfully and complete the expedition,” said Prachi.

Now Prachi is aiming high and wants to pursue a career in Mountaineering. She also completed her NCC ‘C’ certificate but wants to go along with her passion. “Since childhood mountaineering is my passion and till date I climbed mountains like Kalindi, Thelu, Shwet, Hathni, Shitidhan, Chandrashlu successfully. I already completed the basic course and now going for advance course at the end of June. I left the defence career just to pursue my passion to make a career in mountaineering,” said Prachi.