Young girls of Shree Haribhakti Raneshwar Vidyamandir in Vadodara tried to know that thinking of others interest while taking decisions and living as sensitive human being and aware of one’s responsibilities. The girls were narrated the story of Dattak Rajkumar and Baital Pachchisi in the session organised bt SaMvitti foundation.

The story of Dattak Rajkumar and Baital Pachchisi by Somdev was narrated by resource persons Manali Joshi and Nita Dave to young girls of Shree Haribhakti Raneshwar Vidyamandir in Vadodara. 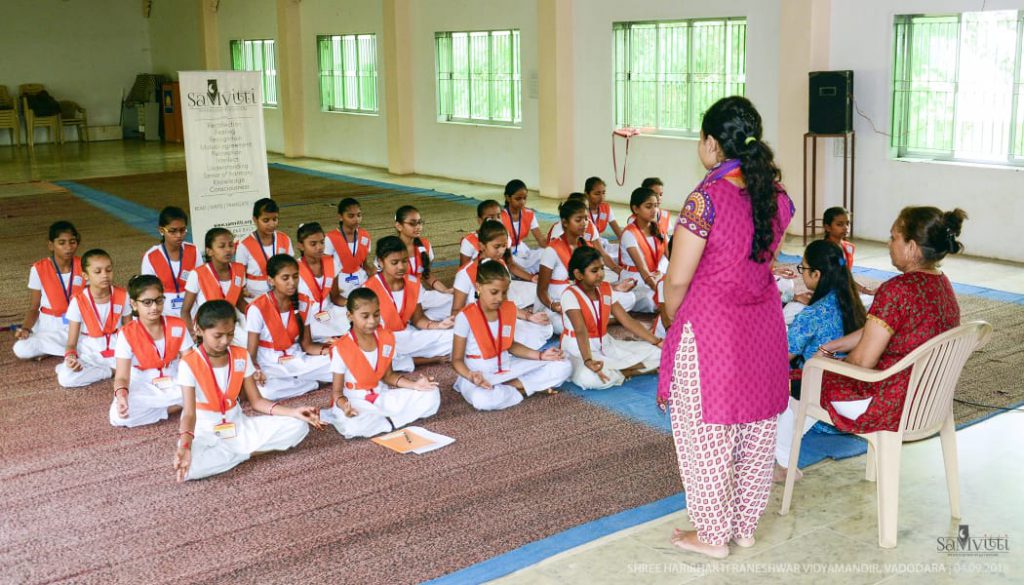 The story started with a beautiful imagination and narration of a town, the people living in it and its design. The town was designed in such a self-sufficient manner that no one needed to venture out of the town in need of things. One fine day the King of that land moved around to supervise this town and on doing so felt proud to see the beauty of this town and the happiness of its people. He enquired from the townsfolk about the town and their reviews regarding the King and felt satisfied on receiving positive feedback except for one thing.

In his interaction with a man, he was told that this Kingdom had no heir as the King and the Queen had no Prince to take care of this Kingdom after the King died. In a bid to resolve this, the King and the Queen decide to look for a suitable young man and adopt him as their Prince. They meet many young men such as, an artist who designed beautiful sarees, then a man who could talk to birds and animals in the forest and a young man who saved the Queen when she got trapped and hung to a tree in the forest.

At the end of the story, as always, the question was asked to King Vikrama, “Which man should be made the Prince-an heir to the throne?” The definite choice is the young man who saved the Queen as the characteristic of being brave is a must for the King to rule efficiently.

This story made the participants aware about the sense of responsibility as a King and tried to connect that to their regular lives and how they can sharpen their decision-making skills to face various situations in life. They were able to identify their own responsibilities and understood its importance. At the end of the session there was a collective participation in imagining, ‘what would it be like if the King had selected all the three men as the Princes?’

After the story of King Vikram and Betal, Nita Dave narrated a small story of two very young friends out of which one falls asleep in a well. The other friend saves him as there was no one to tell him that he cannot do so. Nita brings about the example of Krishna and Sudama to elaborate the idea of friendship. Also it emphasised on trusting one’s own self.