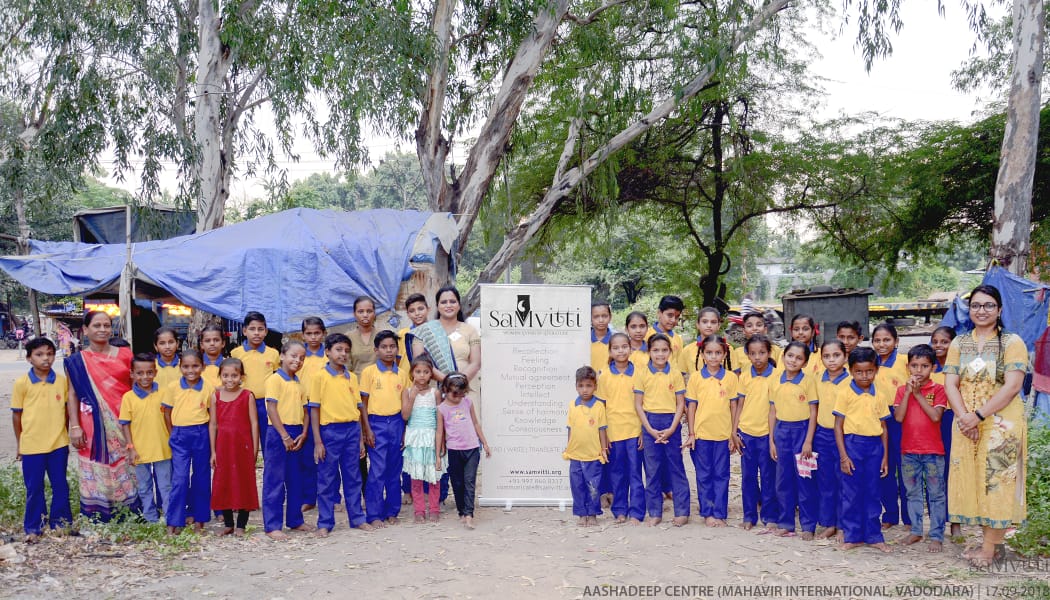 This time SaMvitti foundation in Vadodara organise a story telling session in order to give a insight on role and responsibility as human and aware about the superstitious beliefs in day to day life. SahiytaMitra Naina Parmar pick the story 'Vehem nu Osad' from the tales of Akbar Birbal and shared it with the very young boys and girls of Aashdeep Centre of Mahavir International in Vadodara.

In this story of Akbar and Birbal, one fine morning as King Akbar woke-up and looked out of the window, he happened to see the face of a sweeper cleaning the palace compound. He got superstitious and believed that he will have a bad day now.

While the emperor was offering prayers in the mosque, he receives the news that the King of Bundelkhand was on his way to wage war against Akbar. On hearing this, he leaves his breakfast and goes for war. The King of Bundelkhand retreats on seeing King Akbar. At lunch King Akbar's begum gives the news about her brother's death because of snakebite. King Akbar forgoes his lunch and leaves to attend the funeral of his brother-in-law. At the time of dinner, the moment he is about to take the first bite, a lizard falls into his plate making him furious out of frustration.

He is superstitiously assured that all the bad things that are happening today is because he had seen the face of the sweeper in the morning. He orders his men to arrest the sweeper and give him capital punishment. In order to save the sweeper's life, Birbal asks for a meeting with King Akbar as the sweeper's last wish before death.

When the sweeper meets King Akbar, he tells the King that,"Just by seeing my face you feel that you are having a bad day, but, on the contrary, I am having a worse day. I had seen your face in the morning, and I am going to lose my life - I am going to die.” Listening to this King Akbar realised his mistake of getting engulfed by superstitious beliefs and thanked Birbal for making him aware.

The story instigated the participants to think about the sense of responsibility of a King for his subjects. The King was a victim of superstition in the story which was about to lead him to do injustice but Birbal intervenes with his thoughtfulness and makes him realise his mistake.

Participants can understand the power of thought in one's life which can lead to good or bad experiences and also not be based on superstitious beliefs.