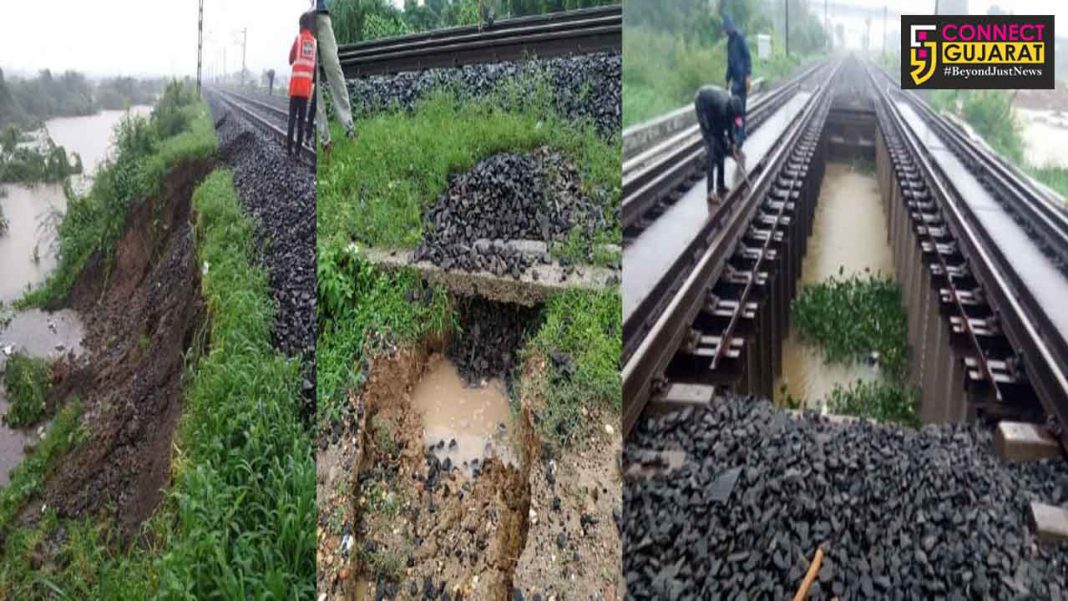 Western Railway has taken various measures to suspend rail traffic to avert dangerous situations due to torrential rain over various sections which could have been proved fatal for people and property. It faced serious deluge situations this monsoon season over Mumbai Suburban line, Vadodara station and its nearby areas and at Surat-Vadodara section.

Many teams worked round the clock during flooding caused by heavy rains to ensure excellent coordination among field units and to ensure safe train operations to keep the wheels running. From 31st July to 6th August, 2019, a total of 365 trains have been cancelled/short-terminated, which lost 2,83,555 passengers and Rs. 10.12 crores loss of earnings.

According to a press release issued by WR CPRO Ravinder Bhakar, due to waterlogging at Bajwa, Vadodara and its surrounding areas from 1st August to 3rd August, 2019, a total of  76 trains were affected. The incessant rainfall caused heavy waterlogging which lead to cancellation of 28 trains.  Despite dire situations higher authorities continuously monitored the situation to ensure necessary action.

Due to heavy rainfall on 4th August, 2019, on Mumbai  suburban line between Vasai Road-Nallasopara-Virar   section the water level around the area had risen up faster than expected which led to suspension of traffic on Fast Lines between Vasai and Virar. However on the Slow Lines, trains were running with restricted speed to avert  any mishap. Once the water level was below danger especially on many bridges, train movement was restored  soon. A total of 12 long-distance trains were affected on this line.

Bhakar also stated that on 4th August, 2019, due to heavy waterlogging at  Gothangam , Sayan and Kosamba, a total of 156 trains were affected. The heavy rains caused total stoppage of traffic on both Up and Down lines at Surat-Vadodara and Kim-Sayan sections. Due to heavy rainfall in villages and catchment between Kim-Kosamba on Surat-Vadodara section, water touched the bottom of slabs of bridges which was above the danger level. This led to suspension of traffic on both lines.

In coordination with Flood Control and Disaster Room of Surat, Collector of Surat and Bharuch who were monitoring the local flood situation confirmed that Kim River was flowing one metre above the danger level and advised Western Railway to stop train services till the water level reduces. During the patrolling of section, one breach was detected which could have led to an untoward instance on track and in the vicinity. Murari Kumar one of the patrolman saw the embankment falling between Kim – Kosamba section in the rain affected Vadodara – Surat route, which was immediately reported to his superiors. Due to this, the traffic on the route was immediately stopped in order to avoid any mishap.

W. Rly has been receiving incessant rainfall in the past few days resulting in water – logging at railway premises, submerged railway tracks, washouts which lead to cancellation, diversion, short – termination of various trains as a safety measure. Various teams have worked day and night continuously to ensure safety of passengers and smooth running of traffic in last few days.