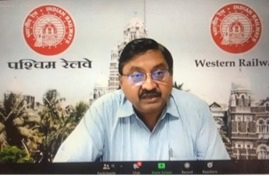 Alok Kansal - General Manager of Western Railway convened a webinar meeting with Members of Parliament of the Standing Committee on Railways to discuss various issues related to improvement in passenger amenities and services of Western Railway. The virtual meeting was attended by Members of Parliament, Arvind Sawant, Ranjan Bhatt, Sadhvi Pragya Singh Thakur and Narhari Amin.

According to a press release issued by Sumit Thakur – Chief Public Relations Officer of Western Railway, at the outset, GM welcomed the dignitaries and briefed them about the major achievements and performance by WR in the last year, various ongoing developmental works and futuristic projects as well as the measures taken by Western Railway to tackle the current COVID - 19 situation. He stated that Western Railway converted the CRISIS of 'COVID-19' into OPPORTUNITIES and made impressive performance in many fields including Infrastructural developments.

GM informed about the recent development by Western Railway of running the Oxygen Express from Hapa in Gujarat to Mumbai carrying 44 tonnes of Liquid Medical Oxygen in 3 tankers. He also stated that to meet the extra summer rush demand, Summer Special trains are being run by WR for the convenience of passengers, especially, to the north, eastern & north eastern parts of the country.

Thereafter, presentations outlining the notable achievements in the constituencies of the MPs were presented by the respective Divisional Railway Managers for the overview of the distinguished guests.

Thakur stated that the MPs praised Western Railway’s performance and appreciated the good work done inspite of the various hurdles posed by the pandemic. They discussed and questioned issues related to passenger amenities, progress of major railway projects, COVID preparedness and others. Arvind Sawant showed his appreciation for providing new Foot Over Bridges as well as the dismantling of old FOBs in the Mumbai suburban section. He asked to expedite the work of Delisle ROB also and assured of all possible assistance from his side.

On the query raised by Sawant regarding running of Oxygen Express train, GM informed that the Oxygen Express from Hapa has reached Mumbai (Kalamboli) safely and securely, following all parameters of transporting cryogenic cargo. It was run at an average speed of about 50 kmph and was given a through path for faster movement.

Sadhvi Pragya Thakur enquired about the Isolation coaches to be made available at stations for the treatment of COVID patients. MP was informed that the coaches can be made available for use as per the demand raised by the District Administration. Divisional Railway Manager – Ratlam will co-ordinate with respective District Magistrates in this regard.

Thakur further stated that, MP Ranjanben Bhatt was impressed with the various developmental works undertaken at Vadodara station and expressed her appreciation. She has desired to expedite the works pertaining to passenger safety and conveniences such as FOBs and Booking offices, PRS counters respectively at Vadodara area. MP also suggested to convert Pratapnagar railway station into a Satellite station and also to expedite the demand for a second entry at the station. It was informed that the work on second entry is being planned alongwith the Vishwamitri – Kevadiya doubling work. She also enquired about the progress of the work of Bullet train project at Vadodara.

Thereafter, Narhari Amin put forth his queries and suggestions regarding various passenger facilities and amenities being provided at Ahmedabad station. He also enquired about the measures taken at Ahmedabad station with regards to COVID Appropriate Behaviour. It was informed that Thermal screening of passengers is being undertaken at Ahmedabad station and all necessary protocols are in place, to create awareness amongst passengers to follow the norms, protocols and SOPs related to COVID – 19 including maintaining social distancing and wearing of masks at stations as well as while travelling in trains.

Amin was apprised about the facelift given to Ahmedabad station and to Chandlodiya station, including various amenities augmented in the nearby stations. Further he also took stock of the various ongoing major projects pertaining to Electrification, Doubling, New Lines, Gauge conversion. MP was briefed on the status of the ongoing infrastructural projects and that all efforts are being taken to complete the works within the set target date.

Thakur stated that it is pertinent to mention that Arvind Sawant raised 38 issues under MP references of which 35 have been answered favourably and 3 are remaining for clarity in policy matter. Similarly, Sadhvi Pragya Singh Thakur had raised 3 issues out of which 2 have been answered favourably & the other is pending for policy clarification. Ranjan Bhatt has raised 3 issues under MP references. These references have been acknowledged and are under consideration.